India will not partake in Saarc conference if it is held in Pakistan: Swaraj 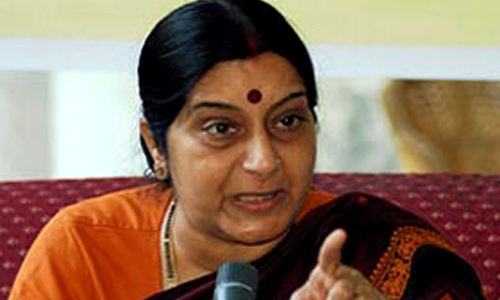 India will not partake in Saarc conference if it is held in Pakistan: Swaraj

NEW DELHI (92 News) – Indian Minister for External Affairs Sushma Swaraj on Wednesday announced that India will not participate in the South Asian Association for Regional Cooperation (Saarc) conference if it is held in Pakistan. Sushma Swaraj said while addressing a press conference when an Indian delegation is currently in Pakistan for attending hours before the groundbreaking ceremony of Kartarpur corridor in Pakistan’s Narowal district. The external minister said that the Kartarpur corridor initiative is not connected with the dialogue process with Pakistan. Indian minister categorically said that the dialogue and opening Kartarpur border are two different matters. “Bilateral dialogue and Kartarpur corridor are two different things. This does not mean that the bilateral dialogue will start only on opening of Kartarpur corridor,” she said. The unprecedented event of Kartarpur border opening can be termed as another achievement of Pakistan on diplomatic and moral grounds against India, which has continued its hostility with Sushma Swaraj declaring that “opening of Kartarpur corridor does not imply beginning of any bilateral dialogue with Pakistan.” On November 23, Swaraj excused herself from attending the groundbreaking ceremony of the Kartarpur Border, without giving any specific reason. In a historical event today, Prime Minister Imran Khan has laid the foundation stone of Kartarpur Corridor which will link Gurdwara Darbar Sahib in Pakistan with India’s Gurdaspur district.