Indian capital under cloud of smog as pollution level jumps 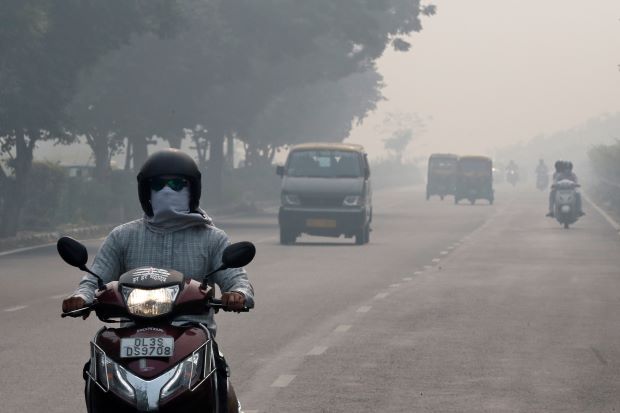 Indian capital under cloud of smog as pollution level jumps

NEW DELHI (Reuters) - Air quality in India’s haze-hit north, including the capital, New Delhi, deteriorated sharply on Monday because of unfavourable weather and an increase in smoke from stubble burning in fields across the region. Levels of PM 2.5, tiny particulate matter that can reach deep into the lungs and cause major health problems, were above 400 in most parts of the capital, and in some places soared above 600. That is nearly 24 times a recommended level of 25 micrograms per cubic metre on average over a 24-hour period, set by the World Health Organization, which this year said India was home to the world’s 14 most polluted cities. New Delhi was ranked the sixth most polluted. After a little improvement , when wind picked up, air quality worsened early on Monday, with forecasts of worse to come over the next few days. “Wind speeds dropped to 15 kilometres per hour from 29 and there’s a significant jump in crop stubble burning in Punjab and Haryana in the past few hours,” Anumita Roychowdhury, an executive director at the Centre for Science and Environment think-tank, said, referring to two states where farmers burn stubble in their fields to prepare for winter planting. Authorities warn that crop residue burning will peak in the next few days. Adding to the fears, Indians will celebrate the festival of Diwali on Wednesday, when many members of the majority Hindu community will set off celebratory firecrackers. The Supreme Court last month allowed the use of “green” firecrackers for Diwali to try to curb pollution, but it was unclear how the rule would be enforced or whether there was such a thing as an environmentally safe firework. Lower winter temperatures and higher moisture, coupled with lower wind speeds tend to trap pollutants in the atmosphere, said Roychowdhury. The Indian Institute of Tropical Meteorology also said that changes in the speed and direction of the wind, and more stubble burning, had made the air more toxic. The sale of air purifiers had surged 40 percent from last year because of increasing public awareness about the effects of pollution on health, company and industry officials said. New Delhi and its satellite cities account for the bulk of air purifier sales but they are picking up in other cities such as Mumbai and Bengaluru. The air purifier market is dominated by Unilever’s, Blueair, Honeywell International Inc and Britain’s Dyson.