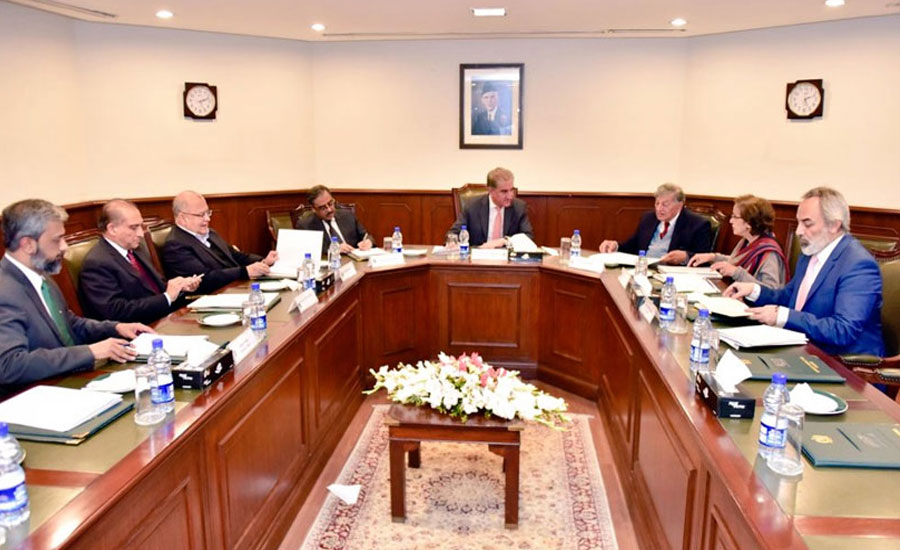 ISLAMABAD (92 News) – Foreign Minister (FM) Shah Mehmood Qureshi has said that India is resorting to continuous ceasefire violations along the Line of Control (LoC) to divert attention from its internal anarchy. Chairing the consultation meeting of former foreign secretaries in Islamabad on Friday, the foreign minister said that the fire which was erupted by the Modi's government in Occupied Kashmir on 5th of August, has now engulfed the entire India. Shah Mehmood Qureshi said Pakistan is exposing Indian brutalities in the held valley at every platform. He said, today, the anti-Muslim and Hindutva-based thought of Modi government has divided the entire India. He said India deprived the world of getting access to the ground realties of occupied Kashmir by imposing restrictions on the means of communications. The meeting also discussed the continued curfew, Indian aggression in Occupied Kashmir and critical situation of peace and security of the region. Earlier, FM Qureshi has expressed grave concern over cutting of the fence at five places of the LoC. In a video message on Thursday, he questioned the designs behind the move, saying whether India is going to launch a new misadventure. “Apprehending the Indian designs, I have sent a letter to the UN Security Council and pointed out four provocative steps of India,” he said. In a series of letters to UN Secretary General and President of General Assembly, Foreign Minister Shah Mahmood Qureshi has urged the UN Security Council to play its rightful role in averting any threats to peace and security in the region as well as bringing an immediate end to the suffering of the Kashmiri people under occupation. The minister, in the letters, conveyed Pakistan’s serious concerns over India’s illegal and unilateral actions in IOJ&K and the resultant humanitarian situation as well as steps on the ground posing serious risks to peace and security. In his latest letter sent on December 12, he apprised the UN Security Council and Secretary General on Indian actions that continue to escalate tensions in an already tense environment in South Asia. The Indian actions include its leadership’s bellicose rhetoric, issuance of new ‘political maps’, unprecedented LoC ceasefire violations, deployment and testing of missiles of various ranges and capabilities, and attempts to change the demographic structure of occupied Jammu & Kashmir.