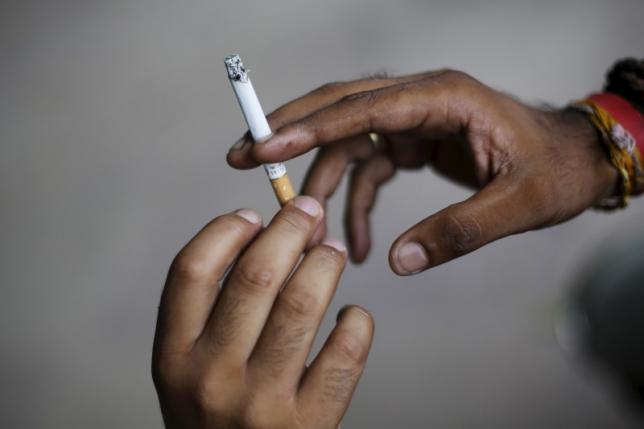 NEW DELHI – Indian cigarette makers including ITC Ltd, part-owned by British American Tobacco, suspended production on Friday over what they said was ambiguity in the government's new health warning rules for packs, a leading industry body said. Rules that mandated 85 percent of a cigarette pack's surface to be covered in health warnings, up from 20 percent, kicked in from Friday after being delayed for a year. But cigarette makers failed to comply, with packs with smaller warnings still being sold in the capital New Delhi. The Tobacco Institute of India (TII) said the industry was concerned over potential violation of health warning rules by continuing production, adding that the production halt would cost the industry $53 million a day. India was last year forced to delay implementation of stringent pack warning rules as a parliamentary panel sought time to assess how the industry would be impacted. The health ministry later decided to implement the rules from April this year, but the panel last month issued a report saying the size of warnings should be reduced to 50 percent in the interest of the industry and tobacco farmers. Health activists have criticized the panel for favoring the industry. The World Health Organization has called the debate on reducing the warnings size in India "worrisome". India's $10 billion cigarette market is dominated by ITC and Godfrey Phillips India Ltd, a partner of U.S.-based Philip Morris International. ITC declined to comment. Godfrey Phillips was not immediately available for comment. TII, which has called the new rules drastic and impractical, said the industry had written to the health ministry seeking clarification. It did not elaborate on what was ambiguous about the new rules. A senior health ministry official, who declined to be named, said the government was committed to implementing the rules. Smoking kills about 1 million people in India each year, BMJ Global Health estimates. The Canadian Cancer Society in 2014 ranked India 136th out of 198 countries that use pack warnings to deter smokers, lagging nations such as Thailand. "The industry is holding the government to ransom. There is no ambiguity in the rules," said Amit Yadav, director, southeast Asia region at Framework Convention Alliance for Tobacco Control, a group of more than 350 global organizations. –Reuters