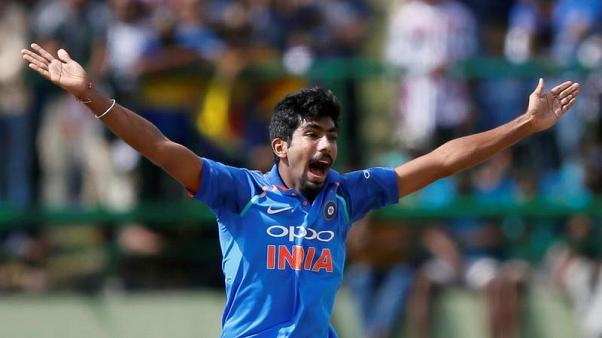 NEW DELHI (Reuters) - Jasprit Bumrah may not have exactly set alight this year’s Indian Premier League (IPL) but the 24-year-old showed his death-overs prowess once again to keep Mumbai Indians alive in the playoff race. The right-arm paceman’s awkward sling-arm action is difficult to score off but it is his late innings mastery which makes him an asset, and which India will hope to see reprised on tour in England next month. Bumrah displayed that skill in Wednesday night’s three-run victory against Kings XI Punjab to lift Mumbai to fourth place in the eight-team league. Bowling the second over of the Punjab innings to the dangerous Chris Gayle and the in-form Lokesh Rahul, Bumrah conceded only one run before being taken out of attack. He conceded four in his second over, the 12th of the innings. Rahul and Aaron Finch were going great guns when Mumbai skipper Rohit Sharma pressed Bumrah into action again and the bowler did not let him down. He dismissed Finch (46) and Marcus Stoinis in the 17th over and dealt a body blow in his next, getting rid of Rahul (94) to finish with figures of 4-0-15-3. “I think Bumrah has come a long way in the past two years, worked really hard on his bowling,” Sharma said at the presentation ceremony. “Never easy to do what he does but he has taken the responsibility. Coming out there and bowling at set batsmen who are trying to finish the job — he’s doing it perfectly for us.” His ability to bowl yorkers almost at will and his unpredictable bounce make him a death-overs nightmare for most batsmen. He attributes it all to clear thinking. “Clarity is very important when you bowl at the death otherwise there’ll be doubt,” he said after collecting his man-of-the-match award. “Even on a bad day when a batsman hits you, you just have to execute your plan. (Rahul) has been batting really well so it’s sometimes difficult to bowl to a batsman like that. But I was backing myself. “I was clear ... On this wicket when the slower ball was bowled on a good length, it wasn’t gripping, so I looked to bowl a dipper and it worked.”