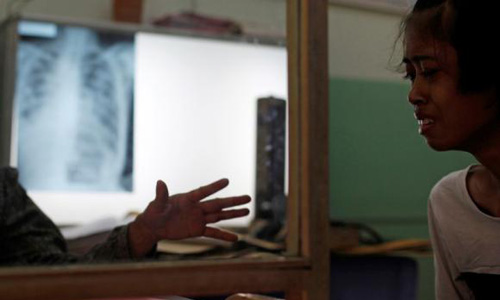 NEW DELHI - When Indian street-food seller Kumar Pal first began treatment for multi-drug resistant tuberculosis two years ago, he quickly spiraled into depression and gave up hope of living. Weighing just 35 kg (77 lbs), shunned by his relatives and friends and in extreme pain due to the side effects of a cocktail of medicines, 40-year-old Pal spent weeks in bed. "I stopped taking the medicines. I was certain that I was going to die anyway. I worried about how my wife would manage with four children," said Pal, sitting in his two-roomed home in the maze of lanes in Sunder Nagari slum in northeast Delhi. "The health visitors gave me support ... they used to tell me to take my medicines, do exercise, eat properly. It gave me hope for the future," said Pal, who now weighs 55 kg and has recently been cleared of the disease. Pal is one of hundreds of multi-drug resistant tuberculosis (MDR-TB) patients at St. Stephen's Hospital in Delhi who have been cured, aided by a unique program providing psychosocial support to sufferers of one of the world's most deadly diseases. Despite a lot of progress over the past two decades, the bacterial lung disease TB, that is spread through coughs and sneezes, infected nine million people and killed 1.5 million in 2013, according to the World Health Organization (WHO). "One of the things overlooked when it comes to curbing tuberculosis is the mental health problems of patients," said Joyce Vaghela, deputy director at St. Stephen's Hospital's Community Health Department. "The long duration of the treatment which can be more than two years, the adverse side effects of all the drugs and the social shame attached to the disease can cause patients to suffer problems like depression, anxiety, anger or even feeling suicidal ... and they soon stop taking their medication." Vaghela said the hospital's home care mental health program has treated over 400 patients with impressive preliminary success rates, proving that psychological support is crucial. Studies by the hospital in 2011 found 5.7 percent of MDR-TB patients under the home care program quit treatment compared to the national average of 23 percent. The death rate under the program was 6.9 percent compared to the average of 23 percent. DIFFICULT DISEASE Each year India has 2.2 million new cases of TB, more than 300, 000 deaths, and economic losses of $23 billion, prompting the nation's president to call for greater efforts to curb its spread, especially with the emergence of MDR-TB, a form resistant to front-line drugs that is hard and costly to treat. All cases of TB are hard to treat and require months of antibiotics. Symptoms include coughing, sometimes with sputum or blood, chest pains, weakness, weight loss and fever. "TB is a major health problem which afflicts mainly the young and working population of our country. It is unfortunate that in India even today one person dies every two minutes due to this menacing disease," President Pranab Mukherjee said in a statement this week to mark World Tuberculosis Day. "There is urgent need to build public awareness about the curability and prevention of this disease." Under a revised government TB control program, patients must report to local TB centers six days a week to have their daily drugs administered but from the 19 million patients treated since 1993, only 3.4 million have been cured. Experts say more than drugs are needed as patients often lack employment, nutrition, decent housing, and good healthcare. "When TB is diagnosed, patients and their families must receive counseling, nutrition, and economic support," Zarir Udwadia, consultant physician at the P.D. Hinduja National Hospital in Mumbai, wrote in the British Medical Journal. INVISIBLE BURDEN In Sunder Nagari slum, home to some 70,000 people, TB is common but still brings with it stigma and shame. Health workers report cases where patients are thrown out of their homes, sacked from jobs and ostracized by their community. With no access to finance to support their families, a feeling of isolation and the harsh side effects of the drugs, patients can develop mental health problems. "While the system is focused on the patient taking their medicines, no one stops to ask them how they are feeling inside," said Ravi Kumar Mishra, one of the eight home care health workers working in Sunder Nagari. "Many of the patients are depressed and feel hopeless. But we encourage them to continue. It's not easy but a relationship develops overtime and the patients learn to trust you and will phone regularly just to talk." Under the program which began in 2009, health workers fortnightly visit patients at their homes and advise and counsel them and their families about the disease and what to expect. Given the low incomes of many families, the hospital also provides supplies such as eggs and milk to patients who require a high protein diet and crèche services to help with day care. In some cases, health visitors have also helped families gain access to government welfare schemes, soft loans and arranged skill development for family members of TB patients. Doctors at St. Stephen's Hospital, which gets funding from the charity United Way Worldwide, say the mental health home care program is effective and should be in the national TB program. "Mental health is the invisible burden of TB," said Vaghela. "Patients do not want to admit to having mental health issues and most doctors are too busy to deal with it. But if we want to end TB, we need to address this aspect of this disease." - REUTERS