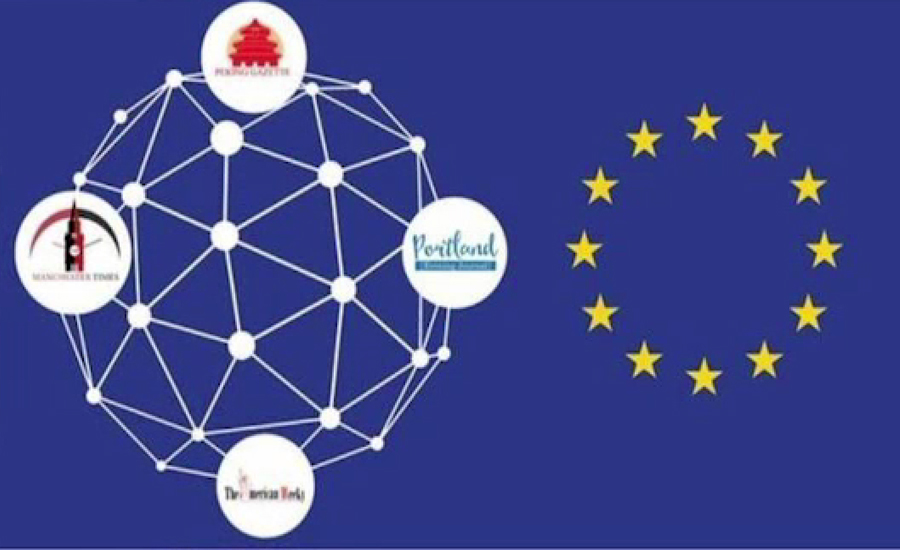 BRUSSELS – A global network of pro-Indian fake websites and think-tanks is aimed at influencing decision-making in Europe, researchers say. The coordinated network of 265 sites operates across 65 countries, according to a report by EU Disinfo Lab, a Brussels-based NGO. The researchers traced the websites to an Indian company, Srivastava Group. The network was also found to involve groups responsible for anti-Pakistan lobbying events in Europe. There's no evidence it is linked to India's government. But researchers believe the network's purpose is to disseminate propaganda against India's neighbour and rival Pakistan. Both countries have long sought to control the narrative against each other. "More than the fake media outlets alone, it is their combination with the fake NGOs that's really worrying because it provides a mirage of online and grassroots support to a cause. That's exactly where the disinformation lies," Alexandre Alaphilippe, executive director of EU Disinfo Lab, told the BBC. 'Zombies, green aliens and blue ghosts' EU Disinfo Lab's investigation started by looking at EP Today, a website which claimed to be an online magazine for the European Parliament in Brussels. In October, the European Union's disinformation task force revealed that EP Today had been re-publishing a large amount of news directly from Russia Today and Voice of America. Some suspected Russian interference, but EU Disinfo Lab, which is an independent NGO, traced the servers behind the website to Srivastava Group. The researchers then uncovered a vast network of English language fake sites serving India's lobbying interests. Many of the fake websites use names of defunct newspapers to provide a veneer of credibility. EU Disinfo Lab have dubbed these "zombie" sites, because the names were resurrected from dead media outlets. For example, one of the sites is called Manchester Times. Its ‘About Us’ section uses text copied from a Wikipedia entry about a newspaper with the same name. But it omits an important part of the Wikipedia description, which states: "The newspaper's last issue appeared on 22 July 1922." It also fails to declare the website's links to Indian interests. Six of the sites use misleading names, like "Times of Los Angeles" instead of the better known "Los Angeles Times". The websites all copy syndicated content from news organisations to make them look like real news sites. They then plant anti-Pakistan stories and opinion pieces from employees of NGOs linked to the network to serve India's lobbying interests, researchers found. The Times of Geneva is one of the most sophisticated websites in the network, and creates a lot of video content. Its activities appear to target decision makers at the UN. The website hasn't been updated since 19 November, a few days after EU Disinfo Lab first announced its discovery of the network. The BBC tried calling the phone number on the Times of Geneva's website, but it has been cut off. Its YouTube channel has been disabled and its Twitter account suspended. Mr Alaphilippe believes the network was created to influence international institutions and elected representatives. "We think the main goal was to be able to reach policymakers in Brussels and Geneva, without being able to trace back to those behind the manipulative network. And this worked!" he told the BBC. "MEPs [Members of the European Parliament] have engaged directly with this network on a multitude of levels, whether that's been through writing op-eds for their media, participating in overseas trips and press conferences, or by speaking in the European Parliament on behalf of the cause." Ray Serrato, an open source investigator with a focus on disinformation, noted how little social media traction the network generated. In an email to the BBC, he says what struck him was that "somebody went to pains to set up hundreds of inauthentic sites to bolster coverage of issues aligned with India's interests, and then used (unwitting?) European MPs to lend legitimacy to some of those sites". "The real-life implications are that officials can be hand-fed and regurgitate specific talking points, completely unaware about how they got them." The EU Disinfo Lab report highlights various organisations which appear to be closely connected, which have been organising "protests and conferences every year during UN Human Rights Council sessions". They focus on campaigns to criticise Pakistan for the state of minorities and persecuted groups in the country. One group identified in the network, the European Organisation for Pakistani Minorities (EOPM), organised a protest in front of the UN in 2016, and a conference held in the United Nations Human Rights Council. In 2017 posters with the message "Free Balochistan" and other slogans supporting minorities in Pakistan appeared on streets in Geneva, resulting in Pakistani authorities summoning the Swiss Ambassador to demand the removal of the posters. The EU Disinfo Lab report highlights that this year, a campaign was launched in front of the United Nations office in Geneva about Balochistan. The protest used the hashtag #PakistanStopGenocide, with speeches made by various individuals named in the report. It was extensively covered in media outlets in the network, such as the Times of Geneva.

Who is behind the network?

Through shared phone numbers and an office address in Brussels, as well as shared web servers, EU Disinfo Lab found Srivastava Group to be at the heart of the network. Srivastava Group is an Indian holding company which declares on its website that it has "interests in Natural resources, Clean energy, Airspace, Consulting services, Healthcare, Print Media and Publishing". One of Srivastava Group's subsidiaries, the International Institute for Non-Aligned Studies (IINS), sponsored a controversial visit to Indian-administered Kashmir for right-wing MEPs in October. The IINS is based at the same address in Delhi as Srivastava Group and an obscure media outlet called New Delhi Times. BBC News Hindi reporter Kirti Dubey visited the address and was told by a security guard there was no office in the building. A neighbour who had lived in the area for 40 years told her he had never seen anyone in the house. Srivastava Group did not respond to the BBC's attempts to request comment by phone and email.

Madi Sharma has been identified by EU Disinfo Lab as central to the disinformation network. She has written for EP Today and the New Delhi Times as their "EU correspondent". It was Madi Sharma who sent MEPs invitations for the controversial trip to Kashmir. She signed the invitation letters as the Founder and CEO of the Women's Economic and Social Think Tank (WESTT) and said the trip would be sponsored by the IINS. EU Disinfo Lab found that WESTT shares some staff with EP Today and had quoted and republished content from New Delhi Times and the Times of Geneva. Madi Sharma, who also goes by the name Madhu Sharma, is a British member of the European Economic and Social Committee (EESC). She was nominated for the committee by the UK Government and has been an EESC Member since 2002. She paints herself as a successful entrepreneur, but according to the UK's Companies House website, her sole directorship in the UK is with Madi Limited, and the company is dormant. Her book Madi - No Excuses has its own website which asks: "Have you heard about the phenomena known as the 'Madi Effect'?" Ankit Srivastava of the New Delhi Times is also vice chairman of the Srivastava Group - and he is likely to have heard of the 'Madi Effect' because he has written her a glowing testimonial on her website. "You know all of us at Srivastava Group and New Delhi Times appreciate you and all your work in the promotion of entrepreneurship, human rights and towards empowering others from all nations," he writes, adding: "Of course we particularly appreciate your support toward India." This support for India and involvement in such a network of websites could be perceived as a conflict of interest for an EESC member like Madi Sharma. She did not respond to the BBC's attempts to contact her. The committee's members are drawn from economic and social interest groups in Europe to represent the views of civil society to European institutions, including the European Parliament. In a statement to the BBC, the EESC emphasised the independence of its members. "The EESC does not engage in image building activities for governments and is independent from any government. [EESC Members] are to be completely independent in the performance of their duties, in the Union's general interest." Asked what standards are expected of members, and whether lobbying on behalf of countries outside the EU is allowed, the EESC shared its new code of conduct with the BBC. It requires "integrity, openness, diligence, honesty, accountability and respect for the Committee's reputation" and avoidance of conflicts of interest. Members do not have to sign the new code of conduct until October next year though. "An advisory committee on the conduct of members is currently being set up and is currently working on its rules of procedure and working methods. To our knowledge Ms Sharma has not signed the new code of conduct." The BBC tried to contact Madi Sharma and Ankit Srivastava directly and through their respective organisations, WESTT and Srivastava Group, but they did not respond. –Courtesy BBC