MUZAFFABAD (92 News) – Claiming surgical strikes, the confused Indian Army opened fire on the helicopter of Azad Jammu and Kashmir (AJK) Prime Minister Raja Farooq Haider on Sunday. As per reports, the firing occurred in Taraori village, which is near the Line of Control (LoC). Luckily, he was saved and also no loss of life reported. PM Haider had gone to the village to condole the death of Chaudhry Abdul Aziz’s brother. In spite the information about the AJK PM’s arrival, the Indian forces attacked on the civilian helicopter of AJK. The Indian claimed that they mistakenly thought the helicopter of Raja Farooq Haider belonged to the Pakistan Army. 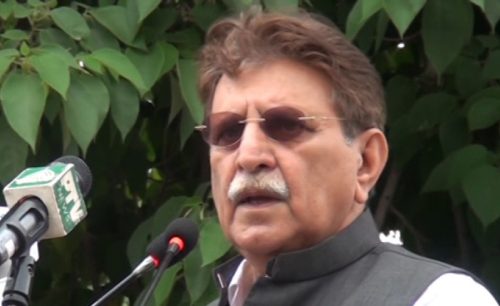 The attack comes a day after Foreign Minister Shah Mehmood Qureshi said that India is responsible for terrorist attacks in Pakistan. While addressing the United Nations General Assembly, he said that India was behind the Army Public School Peshawar and Mastung attacks. The minister also said that should not test their patience and Pakistan will give a full response if India resorted to aggression on the Line of Control. The minister said that Pakistan wants relations with India on the basis of respect and brotherhood. “We want resolution of all problems through dialogues. Owing to the negative attitude, the Modi government missed the third opportunity,” he maintained. He said that India is committing an organized massacre in the Occupied Kashmir. “The delay in the resolution of the Kashmir dispute is a big hurdle in durable peace in the region. This dispute has been a stigma on the conscience of humanity for the last 70 years. We demand early recommendations on the report of the United Nations,” he said. He said that India had continuously been violating ceasefire at the Line of Control. “India promoted state terrorism in Occupied Kashmir. Kulbhushan Jhadav planned terrorism in Pakistan at the behest of the Indian government. Pakistan is facing state terrorism and disruption. The terrorists behind the APS and Mastung attacks had Indian support,” he said.