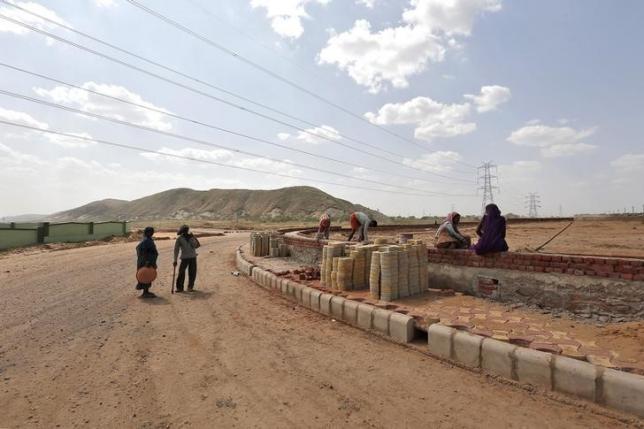 NEW DELHI - India's reformist government went on the offensive on Monday, pushing ahead with a plan to make industrial land purchases easier that sets a course of direct confrontation with an opposition that accuses Prime Minister Narendra Modi of failing farmers. Modi's government passed a slew of economic reforms before a March recess in parliament's budget session, and now wants to cap his first year with a new goods and services tax (GST) and amendments to a land law he says has halted industrial development. Before the recess, Modi failed to get approval for an executive order easing land purchase rules, forcing him to reissue a decree opponents say is undemocratic and will lead to a raw deal for land-owning farmers. "I appeal for support of all parties so that in the second session the nature of talks will be positive," Modi told reporters as he entered parliament. On Sunday he said his party was dedicated to the poor. Supporters say the land plan would favour the rural poor by creating employment alternatives to farming. In the first day back at work, Rajiv Pratap Rudy of the ruling Bharatiya Janata Party introduced the new decree for approval in the lower house, to shouts of "they are looting the farmers" from opposition benches. The speaker adjourned proceedings twice to let tempers cool. The opposition is led by the Congress party, whose vice-president Rahul Gandhi returned from an eight-week break at the weekend to lead a farmers' rally protesting against the proposed changes to a land law he had promoted when his party was in power. Congress was decimated in the election that brought Modi to power a year ago, but senses an opportunity to regain ground on the land issue at a time when tempers are high in rural India over plunging commodity prices and crops damaged by bad weather. Modi's government has a majority in the lower house but will struggle to pass its decree in the upper house, where opposition parties dominate. If it fails again, Modi's next step might be to call a rare joint session of both houses, a senior government source said. In such a scenario, the BJP and allies would command a majority, but would face renewed criticism that they were strong-arming the democratic process. Modi's determination to pass the land law stems from the conviction that existing rules requiring businesses to win consent from 80 percent of landowners before purchase will derail the government's industrial development agenda. Industry bodies blame the land law passed in 2013 for delays in the construction of power projects, highways and airports. Modi was elected on the promise of creating jobs and modernising India's creaking infrastructure. - Reuters