LAHORE (92 News) – Indian Independence Day (August 15) was observed as Black Day throughout Pakistan and on both the sides of the Line of Control (LoC) on Thursday. The Black Day is being observed in protest against the Indian unilateral action to change the disputed status of Indian Occupied Kashmir (IoK). Black flags hoisted on roof tops of the governmental and non-governmental buildings across Pakistan and Azad Kashmir to symbolize rejection for Indian nefarious designs. The national flag and Azad and Jammu Kashmir flag will remain half-mast the entire day. Protest rallies are being taken out in all small and major cities of the country and seminars are also being organized to highlight plight of oppressed Kashmiris who are being subjected to unprecedented persecution over the last ten days. Expat Pakistanis and Kashmiris assembled outside Indian High Commissions and Embassies in all major countries of the world to observe Thursday as Black Day. Punjab Chief Minister Sardar Usman Bozdar has appealed to citizens to participate in the major rally to be taken out on Shahr-e-Quaid-e-Azam (The Mall) today. Rallies will also be organized in Muzaffarabad and other parts of Azad Kashmir as well. Meanwhile, display pictures of twitter accounts of Prime Minister Imran Khan, Director General ISPR, Foreign Office and many others have also been turned black. 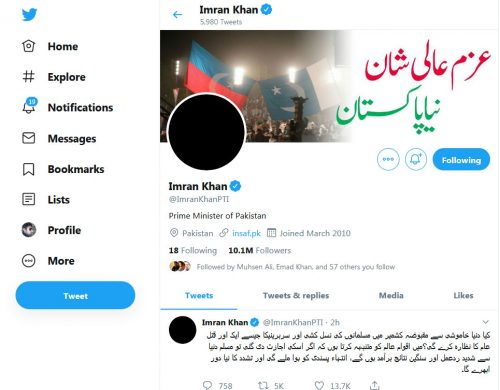 In a statement, the Foreign Office spokesperson Dr Mohammad Faisal said we stand with our Kashmiri brothers and sisters.

It is pertinent to mention here that Black Day has become the top trend in twitter as #15AugustBlackDay. Thousands of twitter users turned their profile picture into black on social media micro-blogging website. They also shared condemnations messages over repercussions on the people of Indian held Jammu Kashmir. https://www.youtube.com/watch?v=GOs9nD0LVb8