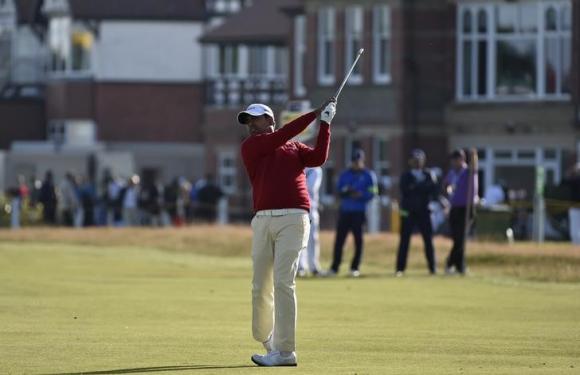 NEW DELHI (Reuters) - Local favorite Anirban Lahiri won a playoff against compatriot SSP Chawrasia to claim his second European Tour title in two weeks at the Indian Open on Sunday. Beginning a dramatic day seven shots behind overnight leader Chawrasia, Lahiri carded two-under 69 and benefited from his opponent's meltdown to join him at seven under par and force the playoff. Chawrasia slumped to a 76 and watched helplessly as Lahiri denied him his third European Tour title by rolling in a 15-foot birdie to clinch the playoff. "It's incredible -- starting today I didn't really think I had a chance," Lahiri, who was four-over after his first 10 holes in the tournament, told reporters. "It was one of the toughest days ever that I've played golf at Delhi Golf Club and I'm really happy to have accomplished this: it's a childhood dream," said Lahiri who won his maiden European Tour title in Malaysia a fortnight ago. "There were about eight of us who could have pulled through so I feel really lucky and fortunate, and really happy," added the 27-year-old, who could move to just outside the top 30 in the world rankings and looks certain to earn a US Masters invitation in April. Chawrasia began the day with a two-shot lead over holder Siddikur Rahman of Bangladesh who won the tournament two years ago before it was co-sanctioned by the European Tour. Sweden's Joakim Lagergren, Thailand's Prayad Marksaeng, Sri Lanka's Mithun Perera and Australian Marcus Fraser finished on six under. Chawrasia dropped three shots in his opening four holes to hand the lead to Rahman but the Bangladeshi also wilted under pressure, returning 76 to finish five-under overall. Lahiri climbed to second place in The Race to Dubai. "It's hard to come to terms with," he said. "Just six months back I was in Spain at Qualifying School and really relieved having stared at not having my card with five holes to go, so it feels like I’ve skipped a couple of steps to get to where I am right now,” he said.