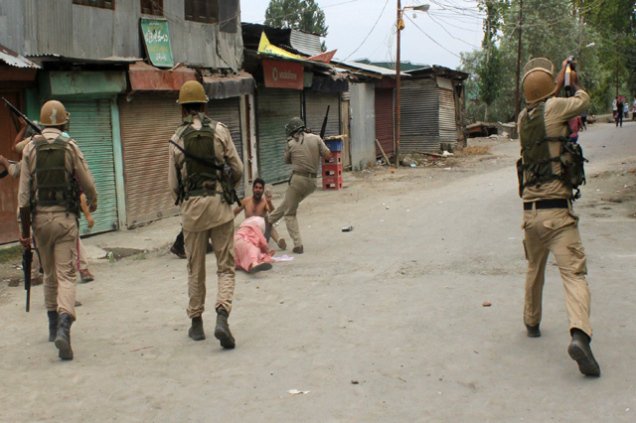 SRINAGAR (92 News) – Indian military siege enters 58th consecutive day, on Tuesday (today) with all main markets, schools and offices still closed and transport off the roads in Indian Occupied Kashmir (Iok). Continued suspension of internet and mobile phones which has cut the territory from the outside world is adding to the miseries of the people. Indian paramilitary forces are harassing the residents in Srinagar to rent their properties to the forces’ personnel posted in the territory. Meanwhile, Indian forces have intensified restrictions in the name of surveillance and area domination operations in the territory. Additional security bunkers are being constructed in the Srinagar city and elsewhere in the valley. On the other hand, as a reaffirmation of their resolve to continue freedom struggle against India’s illegal occupation, people have displayed posters at various places in Mendhar town of Poonch district. Even as few vendors have set up stalls at various places and majority of the landlines have been restored, but they couldn’t cater to the needs of the people due to the imposition of curfew. Main markets and other business establishments continued to remain closed and public transport is off the road in the occupied territory due to curfew. Most of the interiors in Srinagar’s old city continue to remain sealed with iron barricades and concertina wire while deployment of police and paramilitary forces is intact in the city and all major towns and villages across the Kashmir valley.

In occupied Kashmir, Indian troops in their fresh acts of state terrorism martyred seven Kashmiri youth in Ganderbal, Ramban and Shopian districts. The troops during cordon and search operations martyred three youth in Naranag area of Ganderbal and three others in Batote area of Ramban district in Jammu region. Earlier, one Indian soldier was killed and another injured in an attack in Batote. The operations continued till last reports came in. Indian troops also arrested a youth, Sajad Ahmad Malik in Arwani area of Shopian district and martyred him during custody.