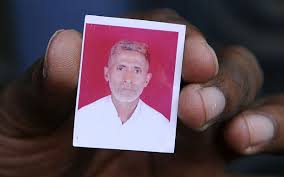 NEW DELHI (92 News) – In a gruesome incident in Uttar Pradesh (UP), Mohammad Akhlaq was beaten and stoned to death by a lynch mob allegedly over rumours that his family had been consuming and storing beef at home. Mohammad Akhlaq and his son were dragged out of their residence by the villagers and beaten mercilessly. While Akhlaq succumbed to his injuries, his son is admitted to a hospital where he is said to be in a critical condition. The rumors that the family had eaten beef began when a calf was reported missing in Dadri village, 22 miles from New Delhi. "An announcement about the family consuming beef was made at a temple, after which the mob descended on the man's house," said Kiran. The Indian Express quoted Akhlaq's daughter Sajida as saying the family had mutton in the fridge and not beef. "They accused us of keeping cow meat, broke down our doors and started beating my father and brother. In March, the state of Maharashtra toughened its ban to make even possessing beef illegal, a move seen by religious minorities as a sign of the growing power of hardline Hindus since nationalist prime minister Narendra Modi came to power.