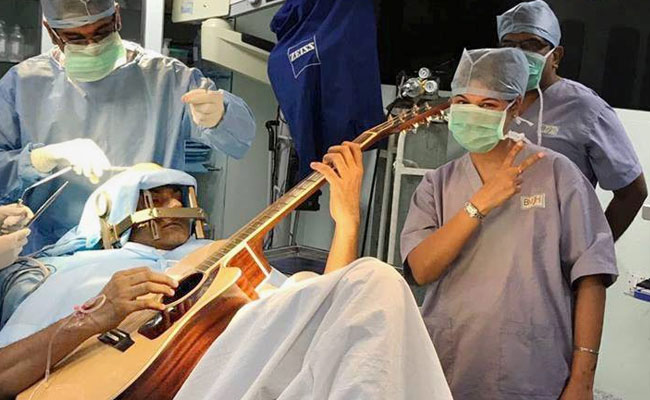 NEW DELHI (Reuters) - Musician Abhishek Prasad strummed his guitar throughout his neurosurgery to help doctors zero in on the part of the brain being operated on during the first such procedure in India.

The 37-year-old had been suffering from musician's dystonia, a neurological movement disorder which leads to involuntary muscle contractions.

Prasad had to be kept conscious during the surgery as the doctors needed continuous feedback to work out exactly which parts of the brain were to be targeted to stop the cramps affecting the three fingers on his left hand.

So the obvious thing was to play his guitar.

It is only the eighth time in the world that such a procedure has been undertaken with the patient being conscious, a statement by Bengaluru's Bhagwan Mahaveer Jain hospital said on Friday.

"A 14-mm hole was made in the skull and a specialized electrode was passed into the brain under local anesthesia," Sharan Srinivasan, a stereotactic and functional neurosurgeon at the hospital, said.

Prasad was overwhelmed with the outcome after suffering since October 2015 with the disorder that could have ended his career.

He had tried several hospitals to find a cure, but most doctors could not diagnose the problem or had focused on the cramps rather than the neurological activity causing them.

"It was a very emotional moment for me and my family. This is what I have been waiting for," said Prasad, who had quit his IT job to pursue a career in music.

"It was very disheartening and depressing for me. I used to cry often due to that. Every morning I would wake up and try to play the guitar. But after 5 minutes, I gave up."

The disorder is estimated to affect around 1-2 percent of all professional musicians.

After the surgery on July 11, he will need a couple of weeks of physiotherapy to help his recovery and get back to performing pain-free.

"My first target is to release an album by the end of this year or the middle of next year," Prasad said.