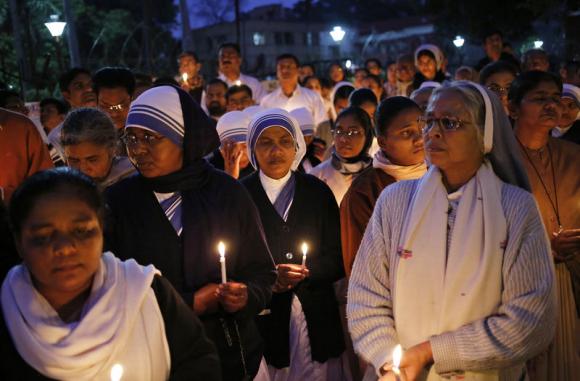 NEW DELHI – Indian Prime Minister Narendra Modi said on Tuesday he was "deeply concerned" about the rape of an elderly nun and the demolition of a church as protests for the better protection of women and religious minorities erupted across the country. Modi has asked for an immediate report on the violence on the weekend, according to a statement. There were angry scenes in parliament as legislators demanded to know why the man accused of rape had not been arrested. Over the last few months, Modi has been criticised for being slow to condemn a series of attacks on Christian institutions, fuelling concern his Hindu nationalist government is failing to rein in Hindu zealots. Outrage over the rape of the nun has reignited an angry debate about the safety of women. "We all feel ashamed, never before could this have been imagined, we have never heard of such things," said Mohammed Salim, a member of the lower house of parliament. "And despite that, after 70 hours no arrests have been made." During a debate, members of parliament shouted: "We demand justice." Hundreds of protesters clashed with police in West Bengal on Monday evening with the disturbance blocking the convoy of Chief Minister Mamata Banerjee for almost an hour. Banerjee, a self-styled champion of the poor, was prevented from travelling along a motorway after she visited the nun in hospital. The crowd surrounded her car with protesters demanding to know why the man suspected of raping the nun had not been caught. Law and order in India is primarily the responsibility of state governments. Police detained nine men after the attack on the 75-year-old nun in a convent school but no arrests have been made. A group of men broke into the school and stole some items. One of them then raped the nun. –Reuters