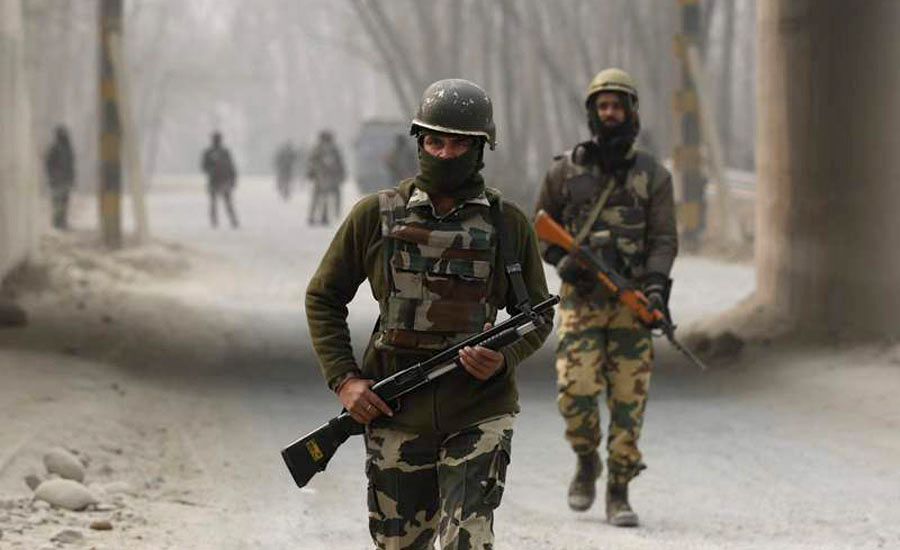 SRINAGAR (92 News) – The death toll of martyred youth by Indian forces’ actions in occupied Kashmir’s Shopian and Islamabad districts has mounted to 21. A total of three Indian soldiers and 13 suspected militants died in several clashes south of Srinagar, the main city of the region. Kashmir has been divided between nuclear-armed India and Pakistan since the end of British colonial rule in 1947, but both claim it in full. The youth were martyred during cordon and search operations, launched by Indian forces at Dagdard and Kachdoora areas of the two districts in South Kashmir. Thousands of people participated in the funeral of a youth martyred by the Indian forces at his native Dehruna village in Islamabad district. Police confirmed that one of the martyred youth was picked up by the Indian army. The killings triggered forceful anti-India protests in the two districts. Over 100 civilians were injured when Indian forces used brute force and fired pellets and bullets on protesters. Shutdown was observed and protests were held in many parts of Srinagar city. Clashes were reported between the protesters and the troops. Scores of students of Kashmir University staged a protest at varsity campus in Srinagar against the killings. The protesting students shouted pro-freedom and anti-India slogans. They carried banners reading, ‘End Occupation, Free Kashmir’. On the other hand, Prime Minister Shahid Khaqan Abbasi, Foreign Minister Khawaja Asif and Interior Minister Ahsan Iqbal have expressed deep shock and grief at the indiscriminate, vicious martyring of 21 Kashmiri youth in occupied Kashmir by the Indian forces. They said that brutal crackdown, including the despicable use of pellet guns on civilians who were protesting against the killing is deplorable. PM Abbasi emphasized that the Indian attempts to label the legitimate Kashmir struggle as terrorism cannot deter the valiant people of Jammu and Kashmir from their demand of exercising their right to self-determination in accordance with the UN resolutions. He called upon international community to urge India to allow access to fact-finding missions to occupied Jammu and Kashmir. Meanwhile, the AJK government has announced to observe condemnation day today (Monday) against killings of innocent Kashmiris by the Indian troops. AJK Prime Minister Raja Farooq Haider Khan appealed Kashmiris living in the country and abroad to observe condemnation day and express solidarity with the victims of Indian brutalities. He said that the Indian troops and infamous intelligence agencies are perusing a policy of genocide of Kashmiris.