SRINAGAR (92 News) – In the fresh act of state terrorism, Indian troops on Sunday martyred two youth in Indian-held Jammu Kashmir (IHK). According to the Kashmir Media Service (KMS), the Indian forces continued its barbarism and martyred two youth in Shopian district of Occupied Kashmir. The youth were martyred by Indian forces during a cordon and search operation in Satipora area of the district. Meanwhile, the authorities have snapped the Internet services in the southern district.

Kashmiri mothers waiting for return of their missing sons 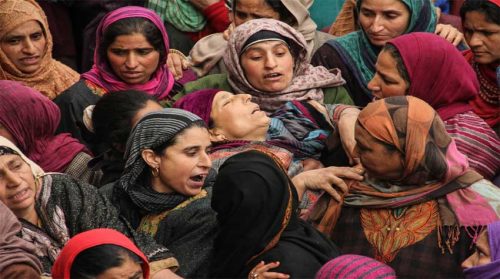 In IHK, thousands of Kashmiri women continue to wait for the return of their sons subjected to disappearance in custody by Indian troops over the past 30 years. A report released by Kashmir Media Service on Mother’s Day, Sunday, says that the continued Indian state terrorism has resulted in the killing of more than 95 thousand Kashmiris including women and children since 1989. As many as 22,873 women have been widowed by the Indian forces and 11,071 women were disgraced during the period. Fifty-five years old resistance leader, Aasiya Andrabi, Fehmeeda Sofi and Nahida Nasreen are illegally detained in Central Jail, Srinagar, The report pointed out that the troops have subjected over 8,000 Kashmiris to custodial disappearance during the period and the mothers of majority of these disappeared people have been waiting for their return.

In Indian-held Jammu Kashmir (IHK), Indian troops in their fresh act of state terrorism martyred one Kashmiri youth in Shopian district. The troops martyred the youth during a cordon and search operation in Amishpora area of the district. Meanwhile, two youth died due to drowning in the water at Birmah Nallah in Udhampur.

In IHK, senior APHC leader Muhammad Ashraf Sehrai has said that the rejection of Indian parliamentary election by Kashmiris gave a stern message that they are only interested in the final settlement of the Kashmir dispute. In a statement, he said time has come for the world to address the dispute by allowing the people of Kashmir to decide their political future as per their aspirations.