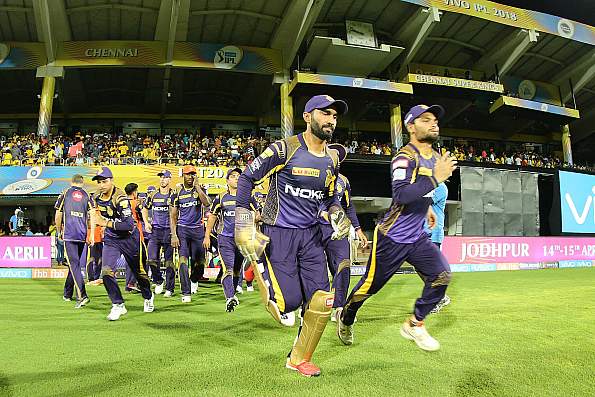 KOLKATA (Reuters) - Skipper Dinesh Karthik’s rearguard half-century and astute marshalling of his bowlers helped Kolkata Knight Riders eliminate inaugural winners Rajasthan Royals by 25 runs in a see-saw Indian Premier League (IPL) contest,. Needing 170 to win, Rajasthan got off to a strong start but wheels came off their chase once skipper Ajinkya Rahane (46) and number three Sanju Samson (50) fell. Two-time champions Kolkata, who restricted Rajasthan to 144-4, will face Sunrisers Hyderabad in the second qualifier on Friday for a place in Sunday’s final against two-time champions Chennai Super Kings. The Rahane-Samson duo added a match-high 62 runs but Rajasthan sorely missed Jos Buttler, back in England for national duty, whose five fifties were crucial to their playoff qualification. Kolkata’s spin twins Kuldeep Yadav (1-18) and Piyush Chawla (2-24) were outstanding with the ball, conceding only 42 runs in their eight overs to choke Rajasthan at the Eden Gardens. Earlier, Karthik led from the front with a fluent 52 and Andre Russell muscled 49 not out to help the hosts overcome a top order collapse and post a competitive 169-7. Rajasthan off-spinner Krishnappa Gowtham denied Kolkata a flying start, dismissing Sunil Narine and Robin Uthappa in successive overs as the hosts slumped to 51-4 in eight overs. Karthik’s calm presence and prolific run have been crucial to Kolkata’s campaign and the right-hander once again shone with the bat to arrest the slide. He raised 55 precious runs with Shubman Gill (28) to steady the ship but it was West Indian Russell who provided the late assault to take Kolkata past the 150-mark. The all-rounder belted five sixes in his 49 not out to change the complexion of the match and was adjudged man-of-the-match.