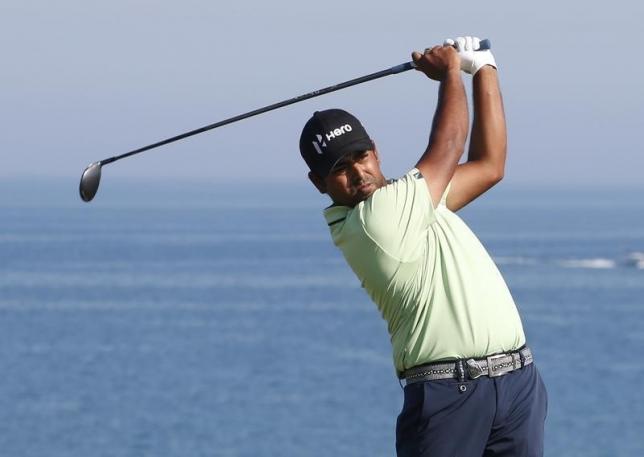 KOHLER - Anirban Lahiri notched up India's best-ever result at a major championship by finishing tied fifth at the PGA Championship on Sunday, leaving him in no doubt he belonged at golf's top table with the game's current crop of rising stars. The 28-year-old closed with an assured final round of four-under-par 68 and a 13-under total on the notoriously tricky Whistling Straits track, seven shots back of winner Jason Day of Australia who held off double major winner Jordan Spieth. "It's been a fantastic week," Lahiri told reporters after eclipsing the previous Indian major record of a tied ninth finish by Jeev Milkha Singh at the 2008 PGA Championship. "I won't really say I was in contention here because I was a long way out but I was in the mix. It's a great feeling, it's massive for me. It gives me so much confidence. "It also tells me that I can compete with the best on the toughest courses and the best fields. It also tells me that I need to get just a little bit better and maybe I'll be back here more often." Lahiri, who finished tied 30th at the British Open and made the cut at his first Masters this year, has enjoyed a whirlwind 18 months. He has won four times on the Asian Tour, with two of those triumphs coming crucially in tournaments co-sanctioned by the European Tour that carried more weight. His world ranking has surged from 195th to 38th with a spot on the Internationals team for the Presidents Cup in October all but assured. The biennial team event in South Korea would see Lahiri mix it again with Day and new world number one Spieth and the Indian said his PGA display, where he out-performed second-ranked Rory McIlory, showed he had no reason to feel inferior. "I didn't really feel out of place. I think that's a massive positive for me," he said of his Sunday display where he played alongside world number 15 Matt Kuchar. "I felt really comfortable whoever I was playing with and whenever I was playing and whatever I was doing, I felt very much at home. I think that's a good sign." Lahiri, though, was already eyeing improvements. His second bogey of the day came on his final hole on Sunday and with it the opportunity to push for better playing opportunities. "It's obviously the scoring aspect that I feel is lacking a little bit. I think that's where I need to tighten it up, just around the greens and make a few more 10 and 12-footers," he said. "I think a couple of shots better would have got my card on the PGA Tour. So a little bummed about that." -Reuters