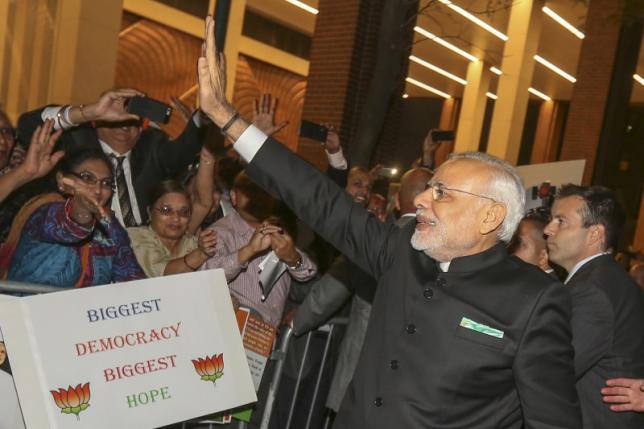 SAN FRANCISCO - Indian Prime Minister Narendra Modi will not only speak to Silicon Valley's biggest executives during his two-day visit to the US tech hub but will also take questions from some of Facebook Inc's 1.5 billion users at a town hall on Sunday. Modi, 65, is the first Indian leader to visit the US West Coast in more than 30 years. His trip follows a similar visit by China's president, Xi Jinping, who met several tech leaders in Seattle last week. The Indian premier continues his Silicon Valley tour on Sunday with visits to Facebook and Google Inc headquarters before an event at the San Jose Convention Center that 18,000 people are expected to attend. Facebook Chief Executive Mark Zuckerberg announced Modi's visit on his Facebook page earlier this month and invited users to post questions. More than 37,000 comments were made in reply, with questions ranging from those about Internet expansion in India, unemployment rates and calls for Modi to address his human rights record. Modi has been criticized for not doing enough to stop 2002 religious riots in Gujarat that killed about 1,000 people, mostly Muslims, when he was chief minister of the state. He has vehemently denied any wrongdoing. Some groups have protested against his arrival. The Sikhs for Justice group has called on its members to picket Facebook headquarters before the town hall. However, Modi remains wildly popular and is expected to receive a rock-star welcome through most of his visit. Modi boasts an 87 percent approval rating in India and is the second-most popular world leader on social media after US President Barack Obama. He has 15 million Twitter followers and more than 30 million "likes" on Facebook. Modi is eager to bring bigger technology investments and jobs back to India to help its growing startup scene. He has also sought to encourage some Indians who have thrived around Silicon Valley to bring their knowledge back home. Much of his visit, which began Saturday, has also focused on connecting with the Indian diaspora community in Silicon Valley. On Saturday, he attended a dinner with 350 business leaders where Indian-born CEOs Satya Nadella of Microsoft Corp, Google Inc's Sundar Pichai and Shantanu Narayen of Adobe Systems Inc moderated a panel. Modi visited Tesla Motors headquarters on Saturday and met Chief Executive Elon Musk, where the two discussed battery technology, energy storage and renewable energy. He also met Apple Inc Chief Executive Tim Cook. -Reuters