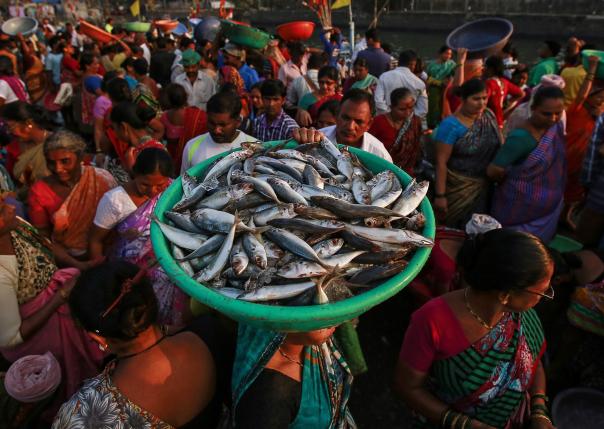 NEW DELHI - India's consumer price inflation unexpectedly slowed to a three-month low in March, which could encourage the Reserve Bank to deliver another off-cycle interest rate cut to boost economic recovery. Retail prices rose 5.17 percent year-on-year last month, slower than a 5.5 percent annual rise predicted by analysts in a Reuters poll and a 5.37 percent gain in February. Food prices were up 6.14 percent year-on-year in March compared with a revised 6.88 percent rise a month earlier. With inflation below the 6.0 percent upper end of the central bank's target range, some analysts expect Reserve Bank of India (RBI) chief Raghuram Rajan to surprise investors with another rate cut. The central bank has cut interest rates twice this year at unscheduled meetings, but kept its key repo rate on hold at 7.50 percent last week, waiting to assess inflation pressures and give commercial banks more time to cut lending rates. "This has raised the possibility of an interest rate cut outside the scheduled review cycle for the third time this year," said Shilan Shah at Capital Economics, who expects a 25 basis point cut before a scheduled policy review on June 2. Before the data, many economists were expecting the RBI to keep rates unchanged for now, but cut once more in late June. During the last few weeks, unseasonably heavy rains in north and central India have damaged crops, leading to a rise in vegetable and foodgrain prices. The RBI said last week that it expects consumer inflation to stay at current levels in the April-June quarter, helped by weak oil and food prices, but rise to 5.8 percent by the end of the year. Globally, central banks are fighting to contain concerns over deflation, as prices continue to fall in most eurozone countries, Japan and China. India, however, is one of the brighter spots, with the economy picking up after two years of sub-par growth, reflecting in part a recovery in business confidence since Prime Minister Narendra Modi swept to power with a landslide election victory last May. - Reuters