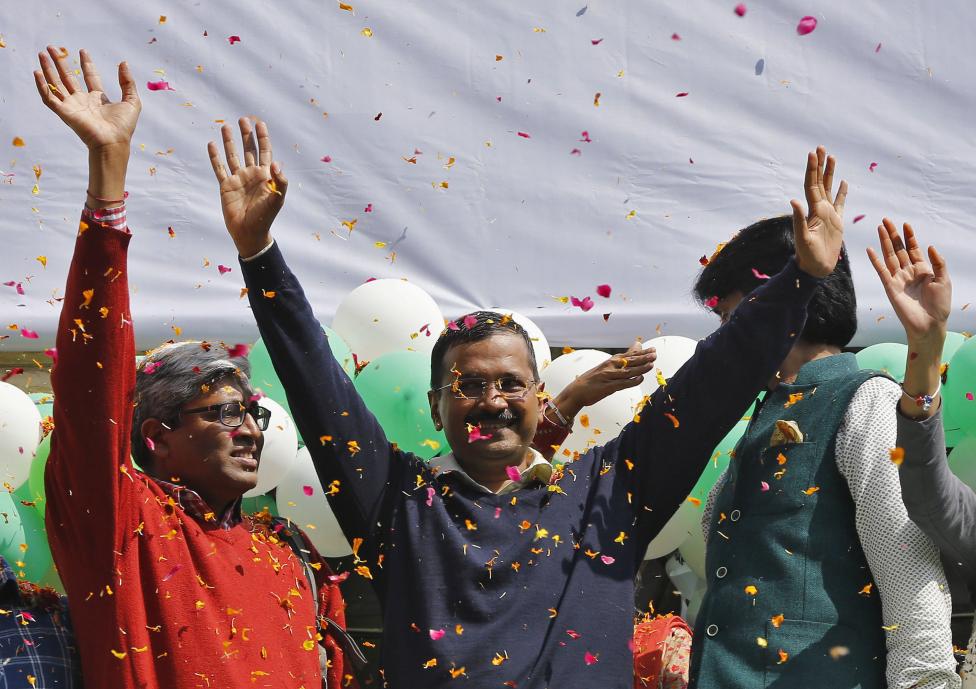 NEW DELHI (Reuters) - An upstart anti-establishment party crushed India's ruling Bharatiya Janata Party in an election for the Delhi assembly on Tuesday, smashing an aura of invincibility built around Prime Minister Narendra Modi since he swept to power last year. With the vote of the main national opposition Congress party collapsing, the Aam Aadmi, or Common Man Party, was set to capture nine-tenths of the seats in Delhi, in what Modi's critics said was a warning against the partisan politics of Hindu hardliners in his fold. Winning power in India's states is critical to control of the upper house of parliament, where Modi's party lacks a majority and has been thwarted in its effort to pass reforms, including wider opening of the insurance sector. Delhi is a small state, but high profile, and such a comprehensive defeat in the capital is a blow to the BJP's ambitions to capture India's second most populous state, Bihar, in an election later this year. The Aam Admi, led by former tax inspector Arvind Kejriwal and campaigning on a platform of pro-poor polices and clean government, was set to win 65 seats out of 70 seats in the Delhi assembly, NDTV projected, the biggest ever tally for any party in the capital. Congress, the BJP's main nationwide challenger, failed to win a single seat, underlining how far the Gandhi dynasty has fallen. The BJP, seen as a party of traders and big business, had slumped to 4 seats, its worst showing ever, with its chief minister candidate and former cop Kiran Bedi struggling to win her own seat. Modi, who threw himself into the campaign, congratulated Kejriwal and said in a Twitter post he was ready to work with him for the development of the mega-city of more than 15 million people. "While Delhi is not very significant in electoral terms, a BJP loss there shatters the popular narrative around the BJP's invincibility," said Milan Vaishnav, an associate at the Carnegie Endowment for International Peace. "A loss in Delhi certainly signals an end to Modi's honeymoon. Furthermore, because it is the capital city, an opposition government, especially one led by the confrontational AAP, would be a constant thorn in the Modi government's side." Hundreds of supporters of the AAP swarmed into its office, wearing their trademark boat-shaped white caps, and showered their leaders with flower petals. India's main stock exchange shrugged off the BJP's defeat, rising more than 1 percent, as traders turned their sights to a reform-friendly federal budget that the Modi government is expected to unveil in parliament later this month. SOCIAL TENSIONS Modi swept to power with the biggest national election victory in three decades last year, promising to revitalize India's economy. His BJP has won a string of big states in recent months. While he has sought to fix governance and tried to push through reform legislation by executive decree after the opposition blocked him in parliament, corporate investment has yet to revive, waiting for structural reforms in the economy. Meanwhile, social tensions have risen as Hindu hardline groups tied to the BJP become more emboldened, rowing with Muslim minority groups over religious conversions. Christian groups have also sought greater police protection after a series of attacks on churches. Even President Barack Obama warned during a visit last month that India could only realize its full potential if it practised religious tolerance. "This is a victory for the people and a big defeat for the arrogant and those who are doing political vendetta and spreading hate among the people," said Mamata Banerjee, chief minister of the eastern state of West Bengal and a bitter foe of Modi. Critics have long accused the BJP of a deep-seated bias against the country's 160 million Muslims and of trying to push a hardline Hindu agenda. The BJP denies any bias and says it is opposed to appeasement of any community. A party spokesman said the Delhi election was a local poll and in no way reflected the BJP's strength in the rest of the country. "This is not a referendum on the central government," said G.V.L. Narasimha Rao. Ajay Maken, the Congress party's lead campaigner, said he would resign his party post after he failed to win his own seat. There was no immediate word from either party chief Sonia Gandhi or her son Rahul on the election drubbing.