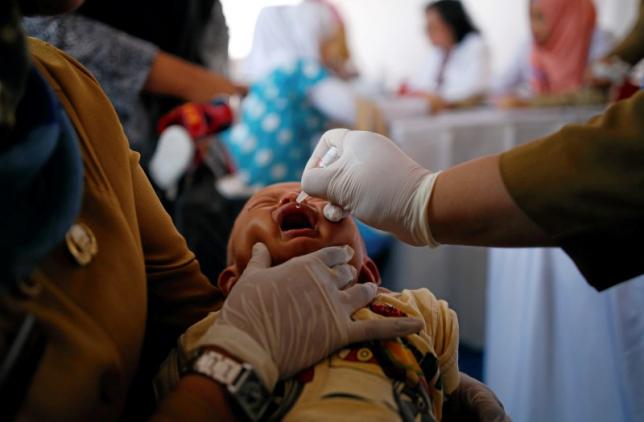 JAKARTA - Indonesia on Monday began re-vaccinating nearly 200 children who received fake versions of imported inoculations from a drug-counterfeiting ring broken up last month after operating for more than a decade. President Joko Widodo urged calm as public uproar intensified over revelations that health officials knew about the syndicate producing the fake vaccines for several years but did little to stop it. The scandal has exposed major weaknesses in the government's oversight of the health sector, which has expanded rapidly alongside a growing middle class. No illnesses or deaths have been directly linked to the fake vaccines, officials have said. "I want to ask people to stay calm because this incident happened over such a long time," Widodo told reporters at a Jakarta clinic offering re-vaccinations. "We need more time to investigate so we can get the real data of people who suffered from these fake vaccines." The ring used stolen vials and forged labels to make the fake medicine look like imported vaccines produced by GlaxoSmithKline and Sanofi. State-owned Bio Farma produces nearly all vaccines available in Indonesia. The syndicate sold fake booster vaccines for hepatitis B, diphtheria, tetanus and whooping cough to at least 14 health facilities in Jakarta and elsewhere on Java island. Health officials said the sham vaccines contained the antibiotic gentamicin and saline solution and were not harmful and made up only 1 percent of total vaccines in Indonesia. Investigators are trying to determine how widely the fake drugs were distributed. Police have arrested nearly two dozen people, including drugmakers, pharmacists, doctors and nurses. The fake medicine was sold to customers for up to 800,000 rupiah ($60) a dose, a big mark-up compared with government-subsidized vaccines that are sold for as little as 5,000 rupiah, police said. Some parents were told by health workers the imported vaccines were better for their children, officials said. Police have identified at least 197 children for re-vaccination, but many more are expected to be confirmed. Health Minister Nila Moeloek told Reuters officials knew fake vaccines were being distributed in 2013 but she declined to say why action was not taken sooner. The president has ordered an overhaul of the food and drug monitoring agency. One mother, Rina Herlina Sari, told Reuters she no longer trusted private clinics. "The government should revoke their permits," she said after her baby daughter got a re-vaccination at a government health center in Jakarta's outskirts. Reuters reporters visited the clinic accused of giving Sari's daughter, and other children, fake vaccines, and found it operating. Its main midwife had been arrested but other staff were working. "The overall facility is a health facility with other areas of care so we have to allow it to continue," Agung Setya, director of criminal police investigations, told Reuters. "It is up to the health ministry to decide whether to shut it down." -Reuters