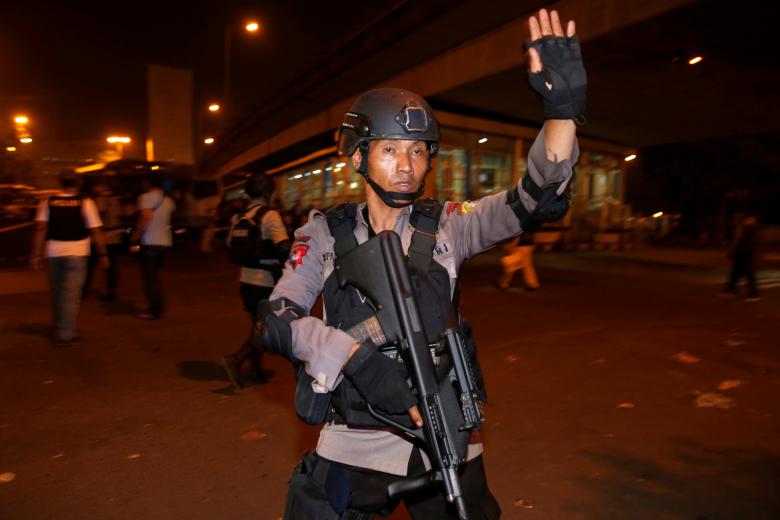 JAKARTA - Indonesian police arrested three people on Friday suspected of being linked to suicide bombings in Jakarta, as the Islamic State group claimed responsibility for the attacks that killed three police officers at a bus station and wounded 12 others.

The attack was the deadliest in Indonesia since January 2016, when eight people were killed, four of them attackers, after bombers and gunmen attacked the capital Jakarta.

"If we make a comparison with other countries, they already have regulations to allow authorities to prevent (attacks) before they happen," Widodo told a news conference.

The president said he had ordered the chief security minister to get the revisions done as soon as possible.

Long-standing plans to reform Indonesia's 2003 anti-terrorism laws have been held up by opposition from some parties in parliament and concerns about individual rights.

The revisions would broaden the definition of terrorism and give police the power to detain suspects without trial for longer. The changes would allow police to arrest people, as well as those taking part in para-military training or joining proscribed groups.

Muhammad Syafi'i of the opposition Gerindra party, who chairs a committee deliberating the bill, said discussions should be completed this year but there were still outstanding issues such as ensuring checks and balances on the counter-terrorism agency.

"This bill needs to be discussed in a cautious and comprehensive way because the purpose of all regulations in this country is to ensure they do not result in the slaughter of Indonesian people, ... but protect them," Syafi'i told Reuters.

The Islamic State group claimed responsibility for this week's attacks. "The executor of the attack on the Indonesian police gathering in Jakarta was an Islamic State fighter," the group's news agency Amaq said.

Indonesia has suffered a series of mostly low-level attacks by Islamic State sympathisers in the past 17 months, but there are concerns that the sophistication is improving.

Police said Wednesday's attack had targeted officers, using pressure cookers packed with explosives. "The explosions were described by police on 24 May as 'pretty big', and the number of wounded and dead would suggest a still-crude but developing bomb-making capability for militants in Indonesia," said Otso Iho, an analyst at Jane's Terrorism and Insurgency Centre (JTIC).

Police have identified the suspected suicide bombers as two 30-year-old men from the West Java city of Bandung.

Indonesian police made three arrests on Friday in Bandung related to the attacks and said they had seized literature, phones and other items during the raids, Yusri Yunus, head of public relations at West Java Police, said. -Reuters