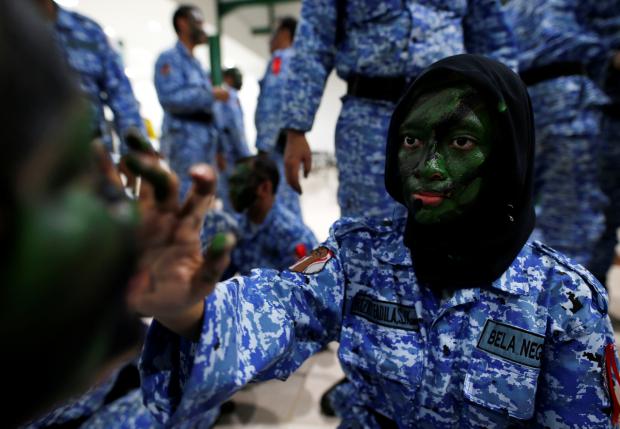 BOGOR - Yakobus Mebri stepped in front of his classmates at a training centre in Indonesia's West Java province and, at the top of his voice, demanded if their hearts burned to defend the nation. "It does! It does! It does!" the recruits thundered back, breaking into what appeared like a war dance. Their instructor, Major General Hartind Asrin, then asked them to sit down: the Bela Negara - "defend the nation" - class was starting. "We have to be more vigilant of potential threats in their infancy," he said as students diligently took notes. The sprawling training centre in Bogor, about 60 km (35 miles) south of the capital, Jakarta, is at the heart of a movement spearheaded by officials from the ministry of defence and military against perceived threats such as communism, drugs and homosexuality. The concept of defending the nation in this way has existed since before Indonesia's independence in 1945, officials say, but they now see a need to shore up protection against "influences" that deviate from the founding principles and norms of the country with the world's largest Muslim population. Over the last few months, the movement has gained momentum, partly in a reaction to support from President Joko Widodo for an investigation into an anti-communist purge in 1965. Historians say at least 500,000 people died in the violence that followed when suspected communists killed six generals in an attempted coup against then-president Sukarno. Successive governments have refused to apologise or accept that death toll, and Widodo's move has outraged many among the military's elite. "THEY DESERVED TO DIE" Defence minister and retired general Ryamizard Ryacudu, who told Reuters recently that communists may now be seeking revenge, last week drew a comparison with the atomic bombing of Hiroshima in 1945 to justify the massacre of half a century ago. "This was an uprising, they deserved to die," he told a conference of retired officers and nationalist groups from which a reporter said she was ejected because some there accused her of being a lackey of the Communist Party of Indonesia (PKI). More than 2,000 members of "Bela Negara" and Islamic groups marched from a mosque to the presidential palace in Jakarta on Friday to protest against what they see as a resurgence of communism, burning hammer-and-sickle flags in the streets. Many in the march said they feared a revival of the PKI, which was one of the largest communist parties in the world before it was outlawed in 1966. Like other protesters Reuters asked, 40-year-old Ilyas from Jakarta had never met a communist. But he had seen signs of their return: "Many features of communism have appeared, from the perspective of culture and clothing and other areas," he said. Under the authoritarian General Suharto who took over from Sukarno, the PKI was dissolved and leftist symbols were banned. Critics believe the recent whipping-up of a "red scare" - along with condemnations of gays and other "foreign influences" - is an attempt by the army to re-militarise Indonesian society following its loss of influence in civil and political affairs with Suharto's fall from power in 1998. JOGGING, SONGS AND LECTURES "Bela Negara" official Major General Asrin told Reuters the programme was necessary to strengthen nationalistic values and said about 1.8 million people had signed up for it. Officials aim to have almost 900 training centres across the country by early 2018, with lesson materials and funding being provided by the government and trainers coming from the military or police, Asrin said. At the training centre, a typical day starts at 5 a.m. with a jog, songs and marches, followed by lectures and practical sessions. Officials insist the aim is to make people better citizens, not soldiers, though Reuters saw some participants learning how to assemble a gun. The spirit of "Bela Negara" can be implemented in various forms, such as reporting a misbehaving peer to the authorities, said Gianto, one of 10 trainers at the centre, who teaches a session on leadership skills. Gianto, who like many Indonesians goes by one name, said he tried to instil a "one for all, all for one" mindset in his students and said a practical example of this would be punishing an entire group of students for the mistake of an individual. The programme stemmed from the concerns of the authorities that some trends in society were not in line with nationalistic values, said political analyst Djayadi Hanan. "But it became controversial because the military and the defence ministry are involved in this programme, prompting suspicion that this is militarisation," he said. For "Bela Negara" student Mebri, however, it will cultivate in Indonesians a love for their country from a young age. "This course helps me to shape my character and personality, so I'll become a strong, determined and honest person who is always ready to follow the orders of my superiors," he said. -Reuters