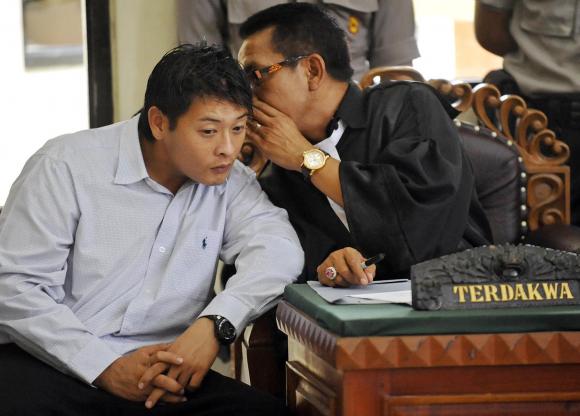 JAKARTA - Indonesia signaled on Thursday that it was not likely to execute foreigners on death row for at least the next 16 days after the attorney general's office said that a group of 10 convicts would be executed together. The 10 people convicted of drugs offences have mostly been transferred to the prison island of Nusakambangan for execution by firing squad. They include citizens ofAustralia,France, Brazil, the Philippines, Ghana, Nigeria andIndonesia. On Thursday, an appeal by two Australians in the group against the rejection of a clemency request by the president was postponed until March 19. A decision on a separate court appeal by a French convict was postponed on Wednesday until March 25. "There has been no change of plans from the AGO that all executions will be all at once," the attorney general's spokesman Tony Spontana told reporters, adding that sentences would not be carried out until "everything is clear". However, Spontana added later than an option of carrying out the executions in smaller groups was still being discussed by officials but no decision had been made. If the appeals are rejected, the government will still have to give 72 hours notice before it carries out the executions. Australia has been pursuing an eleventh-hour campaign to save the lives of its citizens Myuran Sukumaran, 33, and Andrew Chan, 31, convicted in 2005 as the ringleaders of a plot to smuggle heroin out of Indonesia. Australia's campaign and repeated pleas for mercy have helped ramp up diplomatic tensions with Indonesia. Indonesia has harsh penalties for drug trafficking and resumed executions in 2013 after a five-year gap. Five foreigners were among six people executed last month, the first executions since President Joko Widodo took office in October. "There has been a lot of pressure from the international community," Widodo told reporters on Thursday, adding that he had not had any direct contact with Australian representatives aside from communication with Prime Minister Tony Abbott two weeks ago. "I have conveyed many times - this is the sovereignty of our law," Widodo added. "I don't have to repeat myself." Among those on death row, a Filipina convict has appealed to the Supreme Court and a decision could come as early as this week, local media reported. Brazilian national Rodrigo Gularte's family has pleaded for clemency on the grounds of mental illness. The attorney general told reporters in Jakarta last week the prisoner was being examined by medical professionals. Officials were still waiting for the results. Australia's offer to pay for the costs of imprisoning its citizens for life as an alternative to execution was rejected by the Indonesian foreign office on Thursday. "We emphasize that this is not an issue of negotiation," spokesman Armanatha Nasir told reporters. "This is upholding the law. If a country starts to negotiate law, that is a form of violation. So I emphasize that there is no negotiation." Australian Foreign Minister Julie Bishop said she had not heard of any rejection after talks with her Indonesian counterpart Retno Marsudi. "These were preliminary discussions. I'm yet to have a response on that specific issue," Bishop told reporters in Perth. Bishop however said Marsudi rejected an offer of a prisoner swap, with the Australians being exchanged for three Indonesians being held in Australia. –Reuters