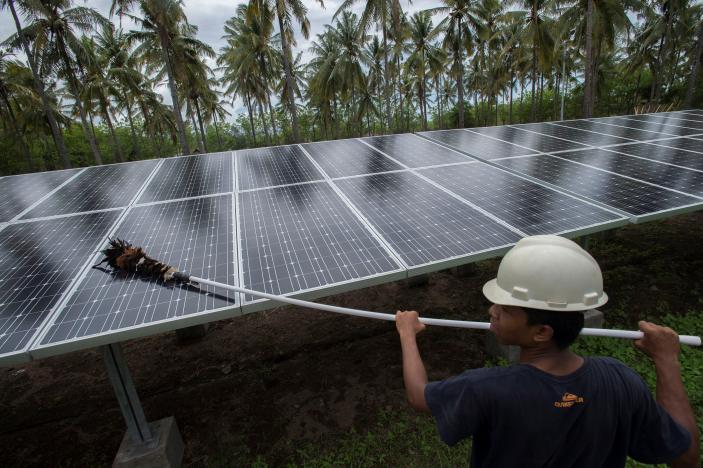 SINGAPORE/JAKARTA - Indonesia and Vietnam are looking to join Thailand in blazing a trail for solar power in Southeast Asia, introducing targets to fire up green energy generation as a landmark global agreement to curb pollution is set to take effect. Countries around the world are coming under increasing pressure to crack down on carbon emissions from sectors such as coal-fired power stations, with the historic Paris climate accord coming into force this Friday after it was signed last year. Indonesia and Vietnam aim to each have annual solar power capacity of at least 5 gigawatts (GW) from 2020, up from close to nothing now, officials from both governments told Reuters. That level of output would have placed the countries among the top 15 solar producers in the world in 2015 data from the International Renewable Energy Agency (IRENA), and would account for close to 9 percent of expected power generation in Indonesia and Vietnam at the turn of the next decade. The regional push towards solar will add momentum to global growth in the technology and could benefit companies such as Canada's CMX Renewable Energy Inc, as well as South Korea's Shinsung Solar Energy and Hanwha Q Cells Korea Corp. "It will come very quickly as it takes a short time for construction," Hoang Quoc Vuong, Vietnam's Vice Minister of Industry and Trade, said on the sidelines of an industry conference last week. However, with initial costs traditionally seen as a big deterrent to solar projects, both Indonesia and Vietnam will be offering opportunities for subsidies via so-called feed-in tariffs (FIT), allowing producers to lock in sales of renewable energy at fixed prices for a few years. "If we promote solar, there has to be subsidy," said the Vietnam official. "Feed-in tariffs have been issued so that the (5 GW) target can be achieved," said Maritje Hutapea, director of various kinds of energy at the Renewable Energy Directorate General under Indonesia's Energy Ministry. France's Engie is in talks with state power company PLN for two solar projects of 200 MW. FEELING THE HEAT Thailand has so far been the frontrunner in developing solar power in Southeast Asia, with a government official saying its installed capacity reached about 2 GW in August, beating its target of 1.7 GW for this year. "We have already exceeded our target for this year, especially in solar and waste power, given attractive FIT rates," Viraphol Jirapraditkul, director of the Energy Regulatory Commission told Reuters. "We have discussed about the possibility of raising the target for renewables and the energy ministry's planning office will need to propose the numbers." Elsewhere in the region, Malaysia plans to add 1 GW of solar power capacity by 2020, or 250 MW per year, said Energy, Green Technology and Water Minister Maximus Ongkili, up from 267 MW currently. And the Philippines has met a previous target of 500 MW for solar, but no fresh target has been set as the country's new government is still reviewing its energy mix. But some analysts cautioned that Indonesia and Vietnam's solar targets were ambitious and could be difficult to achieve. "It's a good move in the right direction but the targets are optimistic," said Paul van der Aa, an advisor at PT. PricewaterhouseCoopers Consulting Indonesia. "It remains to be seen if they can be achieved in the short term." And despite the growth of solar power in the region, coal is likely to remain a major source of energy as fast-growing demand means that Southeast Asia needs to double its power generation capacity in the next decade, government and industry officials said. -Reuters