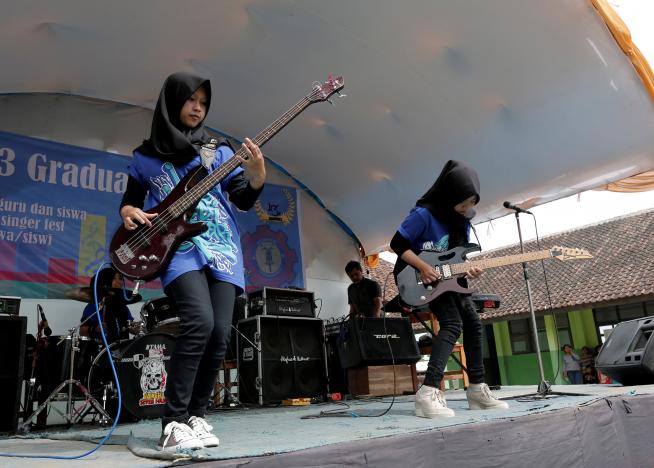 GARUT, Indonesia –With their heads covered with Islamic headscarves, the three members of the Indonesian band VoB ("Voice of Baceprot" or "Noisy Voice") do not look like your typical heavy metal group.

Formed in 2014, the band of teenagers met at school in Indonesia's most populous province of West Java, and use their music to combat the stereotype of Muslim women as submissive or voiceless.

Wearing a hijab, or Islamic head scarf, should not be a barrier to the group's pursuit of its dream of being heavy metal stars, said Firdda Kurnia, 16, who plays guitar and sings.

"I think gender equality should be supported, because I feel I am still exploring my creativity, while at the same time, not diminishing my obligations as a Muslim woman," she added.

Invited to perform at a recent graduation ceremony at another school, the trio quickly had fans dancing and head-banging at the front of the stage.

"I don't see anything wrong with it," said one fan who attended, Teti Putriwulandari Sari. "There's no law that bars hijab-wearing women from playing hardcore music.

"This also relates to human rights. If a Muslim girl has a talent to play the drums or a guitar, should she not be allowed?"

Besides covering classics by groups such as Metallica and Slipknot, the band perform their own songs on issues such as the state of education in Indonesia.

Muslims make up nearly 90 percent of a population of 250 million, the vast majority practising a moderate form of Islam, although there are some conservative strongholds.

Not everyone in the town of Garut, where the band was formed, and which is home to several Islamic schools, feels the community is ready for them, or that their music is appropriate for performance by young Muslim women.

"It is unusual to see a group of hijab-wearing girls playing metal music or even women shouting," said Muhammad Sholeh, a teacher at the town's Cipari Islamic boarding school, adding that religious pop music was popular with many young Muslims.

"But we're talking about metal here, which is loud."

Maudya Mulyawati, a student at the school, felt the band should focus on singing "Salawat", an invocation to the religion's founder, Prophet Mohammad.

An official of a top clerical body said although the group might trigger a culture clash in a conservative area, he did not feel it broke with Islamic values.

"I see this as part of the creativity of teenagers," added Nur Khamim Djuremi, secretary general of the Islamic Art and Culture Division of Indonesia's Ulema Council. –Reuters