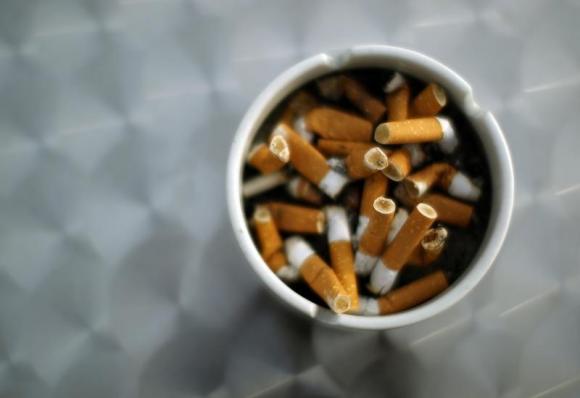 LONDON - The tobacco industry makes $7,000 for each of the more than 6 million people who die each year from smoking-related illness, the health campaign group World Lung Foundation (WLF) said on Thursday. Last year, more than 5.8 trillion cigarettes were smoked, similar to 2013, as rising tobacco use in China counters declines in other countries, according to a report on Thursday led by WLF. In their global Tobacco Atlas, the WLF and the American Cancer Society said that in 2013, the last year for which detailed figures were available, tobacco industry profits were more than $44 billion. Meanwhile, 6.3 million people died from smoking-related illness, equivalent to a profit of $7,000 for each death caused by tobacco. The report said that, if current trends continue, a billion people will die from smoking and exposure to tobacco this century. Besides causing lung cancer, which is often fatal, tobacco use is also a major risk factor for a range of other illnesses. It is the world's leading preventable cause of premature death from chronic conditions such as heart disease, strokes and high blood pressure. In China, the world's most populous country, almost 2,250 cigarettes were smoked per person over age 15 last year, making it one of only around a dozen countries topping 2,000. The average Chinese smoker consumes 50 percent more than in 1980, a symptom of a broader phenomenon, as tobacco use declines or is stable in many wealthy, developed nations but growing in poorer regions such as Africa and parts of Asia. "The significant reductions in smoking rates in the United Kingdom, Australia, Brazil, and other countries that implement increasingly tight tobacco control laws have been offset by the growing consumption in a single nation: China," the report said. Many countries around the world have introduced some anti-tobacco laws, including curbing advertising and banning smoking in enclosed spaces such as bars, restaurants and offices. But the Tobacco Atlas found that only 10 percent of the world's population are covered by comprehensive bans on tobacco advertising, promotion and sponsorship, and only 16 percent by comprehensive smoke-free legislation. Low- and middle-income countries now account for more than 80 percent of tobacco users and tobacco-related deaths. The Tobacco Atlas also found that smoking among women is also on the rise, driving up rates of female lung cancer. In an indication of future trends, there are 24 countries where girls smoke more than boys, compared to just two countries where more women smoke than men, it said. "Whether it's the link between tobacco and increasing rates of lung cancer among women or the ever-increasing number of health conditions and deaths related to tobacco use, the health and economic case for reducing tobacco use has never been clearer," said John Seffrin, chief executive of the ACS. - Reuters