Infantino hits out at 'FIFA bashing' and 'fake news' 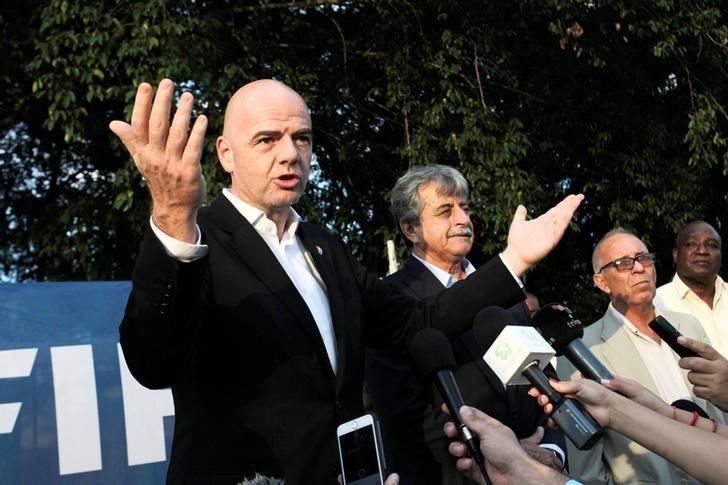 Infantino hits out at 'FIFA bashing' and 'fake news'

MANAMA - FIFA President Gianni Infantino took aim at critics of world football's governing body on Thursday, saying the organisation had reformed and was now a victim of "fake news" and "FIFA bashing".

Speaking to the organisation's 67th congress in the Bahraini capital, Infantino, who replaced Sepp Blatter as head of FIFA in 2016, said it was truly transforming itself.

"We are rebuilding FIFA’s reputation after all that happened. We took over the organisation at it's deepest point," said Infantino, adding that there was no room for anyone who wanted to enrich themselves by "abusing football".

Several dozen football officials, mainly from Latin America, were indicted in the United States in 2015 on corruption-related charges, sparking the worst crisis in FIFA's history.

Infantino said criticism of the organisation under his leadership had not been fair, given improved transparency, controls and ethics procedures.

"There is a lot of fake news and alternative facts about FIFA circulating," he said. "FIFA bashing has become a national sport in some countries".

The Swiss administrator also made some barbed comments about some of his critics among governance experts after a week in which FIFA's Ethics heads were replaced.

"In the past many highly-paid experts, paid millions, have been hired by FIFA to help reform FIFA. Let me ask you, what did they do? They simply rubber stamped a sick and corrupt system.

"Where were all these self-proclaimed gurus and experts? They all miserably failed. I will, we will, not accept good governance lessons from any individuals who miserably failed to protect football," said Infantino.

While suggesting FIFA's internal experts had failed he offered praise for outside investigations, thanking "courts all around the world" who had prosecuted corruption cases.

"We need your help and we count on your help," he added, saying there was no place in his organisation for any wrongdoing.

"If there's anyone in this room or outside of this room who still thinks he can enrich himself, that he can abuse football, I have one clear and strong message to tell him: Leave football and leave football now. We don't want you."

FIFA's budget plans for 2018 and their auditor's report and financial statements for 2016 were all voted through without any questions being raised in the congress hall. -Reuters