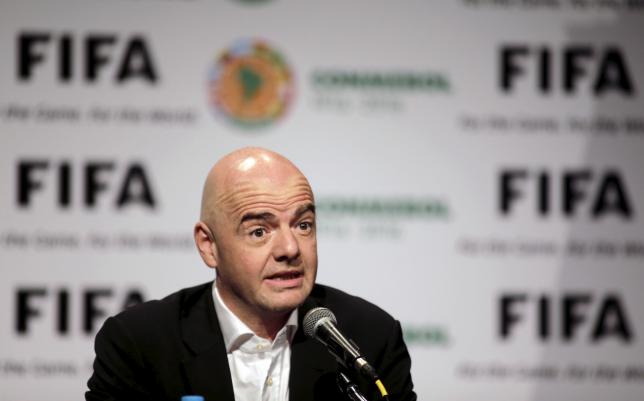 ASUNCION - FIFA President Gianni Infantino gave tentative backing to a joint World Cup bid by Argentina and Uruguay on Monday, suggesting the history of the two South American nations made them serious candidates to host the tournament in 2030. Infantino, elected to run soccer's world governing body in February, was speaking during a visit to the South American Football Confederation's (CONMEBOL) headquarters in Paraguay. FIFA held one joint World Cup in Japan and South Korea in 2002 but has since come out against future joint bids. However, Infantino told CONMEBOL officials that he was not against co-hosting the tournament. "An important theme is whether the World Cup can be played in more than one country," said Infantino. "FIFA has been very much against a joint organisation. I personally support it. "2030 is a very important year and history must be respected." Uruguay were awarded the first World Cup in 1930 and beat Argentina 4-2 in the final. They also won the World Cup in 1950, upsetting hosts Brazil in the deciding match. Argentina staged and won the tournament in 1978 and eight years later Diego Maradona led them to their second title in Mexico. The two countries have on various occasions over the past few years expressed a wish at both Football Association and government level to stage the centennial tournament. CONMEBOL, which threw its support behind Infantino ahead of the presidential election, has been hard hit by the recent FIFA corruption scandal with its last three presidents and officials from all 10 member nations among those indicted. A US investigation into more than $200 million in bribes and kickbacks sought and received by soccer officials for marketing and broadcast rights to tournaments and matches has led to more than 40 individuals and entities being charged. The investigation has sent Switzerland-based FIFA and other soccer governing bodies into an unprecedented crisis. Infantino, who will travel to Uruguay on Tuesday to watch the home side take on Peru in 2018 World Cup qualifiers, has vowed to restore FIFA's image. -Reuters