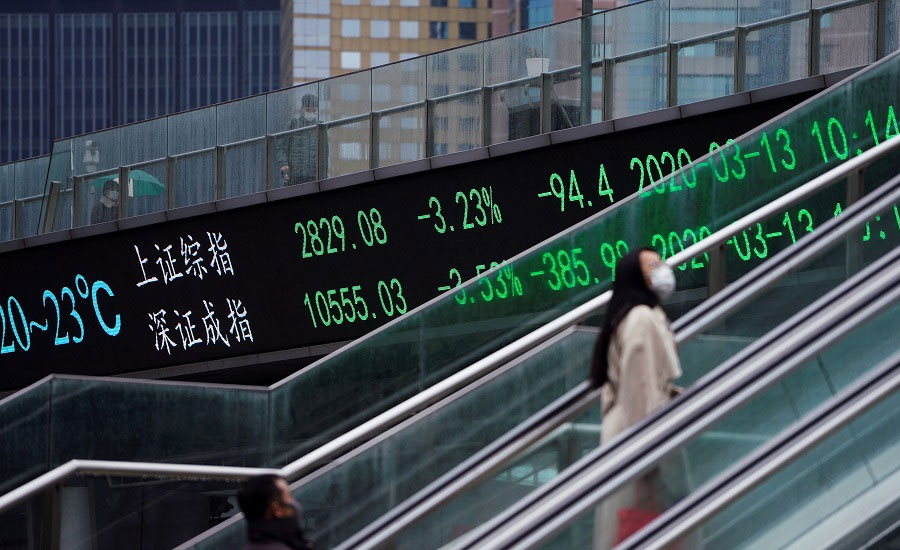 Analysts said a combination of inflation fears and some investors cutting their exposure to over-stretched stocks or sectors was behind the recent downturn.

Taiwan's benchmark index plunged 6% from all-time highs to levels seen in February on fears it may raise its COVID-19 alert level in "coming days", which would lead to closure of shops dealing in non-essential items as infections rise.

Analysts, however, doubted the broader equities sell-off would extend much further in a world of easy accommodative policy and fiscal largesse.

"Despite the severity of the moves, we sensed limited panic in our client conversations with many using (the) weakness as an opportunity to buy the dip, particularly in the value orientated areas e.g. banks, energy and insurance," JPMorgan analysts wrote in a note.

Overnight on Wall Street, technology stocks were among the biggest losers though the tech-focused Nasdaq reversed the bulk of its early 2% decline over the course of the day. The Dow dropped 1.4% and the S&P 500 fell 0.9%.

The equity rout barely helped drive any safe haven flows into the greenback even as futures pointed to yet another negative open for Wall Street. E-mini futures for the S&P 500 stumbled 0.7% while futures for the tech-heavy Nasdaq were down 0.9%.

"What is unusual about the last two days is that the equity-market angst did not provide the U.S. dollar with a notable lift," said Alvin T. Tan, head of Asia FX strategy at RBC Capital Markets.

Tan said there was no sign of "risk-off" among regional currencies either with the high-carry Indian rupees and Indonesia rupiah largely holding their ground.

"Still, it is not yet obvious if this signifies a new market paradigm. As they say, one swallow does not make a summer," Tan added.

All eyes are now on the U.S. consumer price index report to be released by the U.S. Labor Department on Wednesday with market-based measures of inflation expectations having moved higher , .

"Prices are definitely on the increase and this is evident across a wide range of sectors and geographies. What is less clear is the longevity of the increase in prices," ANZ analysts wrote in a note.

Treasury yields have remained stuck to a tight range. The yield on benchmark 10-year Treasuries drifted lower to 1.6217%, a far cry from the 2% level seen in before the coronavirus pandemic.

The U.S. Federal Reserve expects higher inflation though officials have pointed to transient factors and base effect for the temporary rise.

"The upshot is the Fed remains far away from achieving its aim of average inflation of 2% per year. The Fed's ultra-accommodative monetary policy is part of the reason why we consider the USD downtrend is intact," said Commonwealth Bank of Australia analyst Carol Kong.

The dollar index , which measures the greenback against six major currencies, was a shade higher at 90.398, after touching a two-month low of 89.979.

The currencies of major natural resource suppliers such as Canada have been buoyant amid rising commodity prices.

In cryptocurrencies, ether hit a fresh record high touched on Monday to be at $4,349.44. The value of the