LAHORE (92 News) – An influential in Lahore, who subjected a youth to brutal violence at gunpoint, has been arrested by the police on Sunday. The police took action against the influential after video of violence surfaced on the social media and arrested him who identified as Aqeel Mirza. The police also recovered the weapon form the accused. It is pertinent to mention here that Aqeel Mirza is resident of Cantt and branch manager of a private bank. The police is trying to find the person who was subjected of violence by the influential. The police also registered a case against the rich man.  In the video, it can be easily seen that the rich man is beating the young citizen and also giving threats him at gunpoint. Earlier in the morning, an influential man subjected a youth to brutal violence at gunpoint and also gave threats to the young man. 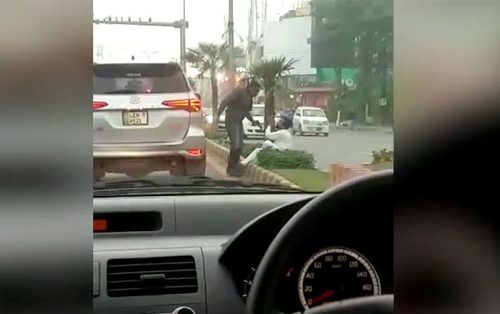 The influential citizen grabbed the young man from his neck and knocked him down and continued to torture the young man after falling down. He kicked on the face of citizen when he was on the earth. After the incident, the video of brutal violence has become viral on the social media. Meanwhile, 92 News obtained the details of vehicle in the use of rich man. The vehicle of influential person is registered on the name of Aqeel Mirza. Aqeel is citizen of Lahore and Model is 2017. Police took the notice after 92 News highlighted the incident on media. The Police constituted the teams to arrest the influential. The police traced after investigation.