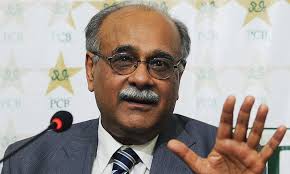 KARACHI: Instability in the Pakistan Cricket Board (PCB) leadership did not allow grooming of a young captain for the future, Najam Sethi said here on Friday. “Instability [within the PCB leadership] is the reason that Pakistan failed to groom a young captain [for the national squad],” Sethi, himself a former interim PCB chief and who is presently a member of the PCB Board of Governors, told reporters here at the National Stadium. Interestingly, the PCB never appointed a vice-captain to national team to prepare him — to eventually replace Misbah-ul-Haq one day — during the era of Ijaz Butt, Zaka Ashraf, Sethi and now Shaharyar Khan. As a result, no vice-captain was named as back-up to Misbah, even for a contest of World Cup’s magnitude. Sethi hoped that a youngster would be appointed captain of the national side when some senior players left the international arena after the coming World Cup. Commenting on the Pakistan Super League (PSL), Sethi said despite failing twice to host the league, the PCB would be holding it in January-February 2016 when a window was available and broadcasters were ready. He said the PCB wanted to hold PSL in Pakistan but big names would not be attracted due to security concerns prevailing in the country. “We cannot attract big names in Pakistan, and [furthermore] they are demanding $100,000 each.” He hoped after the restoration of bilateral cricketing ties with India, Pakistan players would be featuring in the Indian Premier League. On the future series against India, Sethi expected Pakistan to play six series against them during the next eight years or so, adding Pakistan owed four home series against their arch-rivals. Expressing his views over the issue of central contract, Sethi categorically denied there was a rift between players and the PCB on the matter. “There is no rift between the players and the PCB on central contracts. The issue is being blown out of proportion in the media,” he stated. “It’s not a big issue, it was delayed due to the [forthcoming] World Cup and will be settled soon.” He dismissed the impression that Pakistan team’s poor showing on the recent tour to New Zealand was in any way related to the central contract issue. “Criticism raised over the central contract issue is unjust and doesn’t concern the team’s performance [in New Zealand]. The players are concentrating on the World Cup and it is wrong to say that this contract issue is affecting their performance or focus,” Sethi said, reckoning the contract had experienced delays in the past too. Sethi, who takes over as president of the ICC in June this year, said though his position at the world governing body would be ceremonious, he would still try to protect Pakistan’s core interests in international cricket. Commenting on the criterion adopted in team selection for the World Cup — that brought two players (Sohail Khan and Rahat Ali) from outside the 30-member preliminary list — into the 15-man Pakistan squad, Sethi claimed the Moin Khan-headed selection committee was independent and the PCB did not interfere in its functions. However, PCB chairman could forward his suggestions to the selection committee, he added. To a question about the 50 per cent profit share the PCB wanted in the series against Bangladesh, he said the reason behind the PCB making revenue-sharing claim with the Bangladesh Cricket Board (BCB) was that the series cancelled in 2012 was Pakistan’s home affair. He said Bangladesh — despite making written commitments — did not send their team to Pakistan in 2012 as per the FTP due to security concerns. However at the same time, he underlined, the PCB maintains cricketing ties with the BCB.