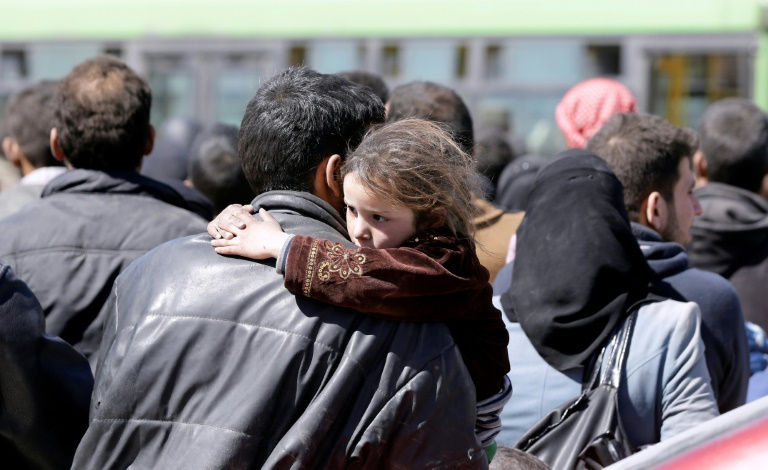 DAMASCUS (AFP)- Syrian civilians in the last rebel-held pockets of besieged Eastern Ghouta have been urged to flee as Russia-backed regime forces storm into the beleaguered area near Damascus, with intense airstrikes killing dozens and causing thousands more to evacuate. The latest deaths on Friday brought the toll for the nearly month-old offensive to over 1,360, with world powers still unable to stop one of the devastating conflict's worst crises.
The Syrian army in a message broadcast on state television urged all residents to use "corridors" it had established to leave the enclave, saying it had recaptured 70 percent of rebel territory.
Syria's war enters its eighth year with another deadly assault also unfolding in the north, where Turkish-led forces pressed an operation to seize the Kurdish-majority region of Afrin. The operation has sent thousands onto the roads, with bombing of the city of Afrin on Friday killing 43 civilians, a third of them killed in a deadly strike on a hospital.
On the edge of Ghouta, a sprawling semi-rural area within mortar range of central Damascus, more than 2,400 civilians streamed out of destroyed towns, carrying scant belongings in bags and bundles. Crowds crammed into a government centre on the edge of Eastern Ghouta on Friday, unsure what the next step would be after walking straight into the arms of the forces that have relentlessly pounded their homes for weeks. Exodus "We were afraid of leaving -- they had told us the army would arrest us," said 35-year-old Abu Khaled, who used to run a retail clothing shop in Ghouta.
"We reached the army and didn't find that, but now we're basically living in a camp," he told AFP. Syria's envoy to the UN Bashar al-Jaafari said 40,000 people fled Ghouta on Thursday, and the sudden exodus appeared to have caught the government flat-footed.
Long lines formed outside public bathrooms, and displaced families complained of lack of access to water or mattresses.
The ground offensive pressed by Syrian troops and allied militia has splintered Eastern Ghouta into three pockets, each held by a different faction. Those three Islamist groups said Friday they would be willing to negotiate directly with Russia on a ceasefire for Ghouta, but did not mention talks with the Syrian government.
Their statement came hours after UN special envoy for Syria Staffan de Mistura said talks were ongoing between Russia and one of the groups, Jaish al-Islam. That negotiations track had already produced six days of calm for Ghouta's largest town of Douma, he said. Douma has also seen deliveries of food, and hundreds of civilians have been bussed out as part of medical evacuations.  Hospital bombed The Syrian Observatory for Human Rights said at least 96 civilians were killed in Russian and regime air strikes on the southwestern Ghouta pocket on Friday.
The Observatory says it determines whose planes carry out raids according to type, location, flight patterns and munitions used. Russia's defence ministry on Friday denied its jets were taking part in the Ghouta operation, calling the Observatory report "fake", according to news agencies.
The heaviest of Friday's raids were on Kafr Batna, where at least 70 civilians died and where the Observatory said incendiary weapons were used. A reporter in the town contributing to AFP saw eight charred bodies in the streets and said wounded people were left in the roads as rescue centres had been put out of service by bombing. Syrian President Bashar al-Assad has in recent months recovered swathes of territory lost at the beginning of the conflict and Ghouta was one of his key remaining targets. An exodus of similar proportions was under way hundreds of kilometres (miles) to the north in the city of Afrin, where Kurdish forces have been nearly encircled by Turkish troops. The Observatory said Thursday more than 30,000 people had fled the city in 24 hours, and another 15,000 escaped on Friday, fearing a siege. The monitor said a Turkish strike on Friday hit Afrin's hospital, killing 16 civilians, including two pregnant women. "There was bombing on the city during the day that got close to the hospital, but this evening it was directly hit," Serwan Bery, co-chair of the Kurdish Red Crescent, told AFP. "It was the only functioning hospital in Afrin city," he said.
The deadly strike brought to 43 the number of civilians killed in the town on Friday, the Observatory said. Turkey's military denied hitting the hospital, saying on Twitter that its operation in Afrin "is carried out in such a way as to not cause any harm to civilians."
The UN said it was worried the forces staying inside were not allowing civilians to flee, as that would leave them more exposed to Turkey's superior firepower. Ravina Shamdasani, spokesperson for the UN's Rights Office, decried "reports that civilians are being prevented from leaving Afrin city by Kurdish forces... (and) are being held to be used as human shields."