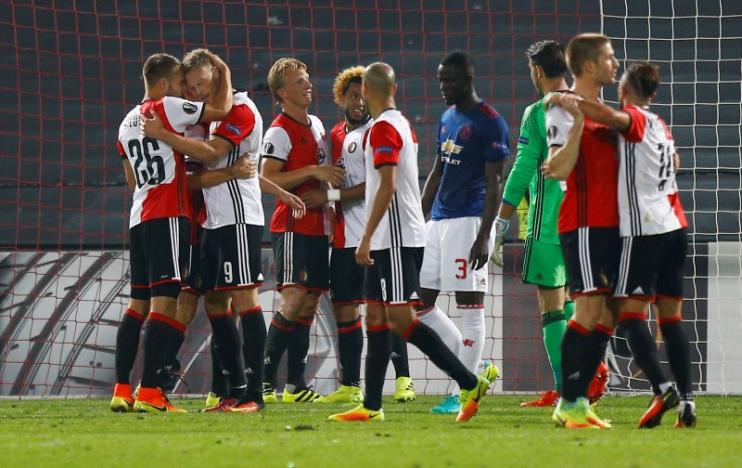 LONDON – Three times European champions Inter Milan were stunned 2-0 at home by Israeli side Hapoel Beer-Sheva and Manchester United were floored by a late goal from Feyenoord as the Europa League group stage got underway on Thursday.
Competition favourites United's trip to Rotterdam turned sour when Feyenoord's Tonny Trindade applied a slide-rule finish late in the second half to secure a 1-0 win in Group A following a poor display from Jose Mourinho's star-studded side. Zenit St Petersburg pulled off one of the most impressive fightbacks in European competition history when they came back from 3-0 down against Maccabi Tel Aviv to win 4-3 with all the Russian side's goals coming from the 77th minute onwards. AS Roma were held to a 1-1 draw at Viktoria Plzen, while fellow Italians Sassuolo, who are making their European debut, enjoyed a superb 3-0 win over Athletic Bilbao. EUROPEAN ROYALTY Beer-Sheva, playing in the Europa League after falling into Europe's second-tier competition following a Champions League playoff defeat by Celtic last month, largely dominated a sluggish Inter side. Inter are continental royalty and boss De Boer has European pedigree, as a player at least, having won the UEFA Cup and Champions League with Ajax Amsterdam in the 1990s, but his team were picked apart and fell behind nine minutes after the break. Portuguese defender Vitor tapped in the opener from a cross by Lucio Maranhao and Buzaglo curled home a free kick after 69 minutes to wrap up the win, leaving their players celebrating a remarkable result with a small group of ecstatic fans. For Manchester United it was a second defeat in six days after they lost to rivals Manchester City in the Premier League, and it ended Mourinho's honeymoon period after he began the season with four straight wins including the Community Shield. United, playing in the Europa League group stage for the first time, never really looked like scoring even after striker Zlatan Ibrahimovic was introduced in the second half and they were picked off on the counter in the 79th minute. Nicolai Jorgensen looked offside when he burst clear on the right flank but he crossed low for Trindade to slide the ball past David De Gea with a precise sidefooted finish. Thursday's action featured the quickest goal in the competition's history when Slovan Liberec's Jan Sykora scored after 10.69 seconds in a 2-2 draw with Qarabag but late goals were the order of the day as Zenit fought back in Israel. ZENIT RALLY Zenit looked beaten when they fell 3-0 behind in the 70th minute against Maccabi but Aleksandr Kokorin headed home to begin the comeback before Eli Dasa was sent off for the Israelis in the 81st. Further Zenit goals soon after from Brazilians Mauricio and Giuliano drew the Russians level and Luka Djordjevic remarkably grabbed the winner two minutes into stoppage time. Roma, who have made a bright start in Serie A with seven points from their opening three games, took the lead against Plzen in Group E when Diego Perotti calmly stroked home a fourth-minute penalty after Stephan El Shaarawy was felled. The lead lasted just seven minutes, however, as Martin Zeman's whipped cross found Marek Bakos to head the hosts level. Along with Konyaspor, Sassuolo are one of two sides in the group stage making their European bow and they produced a stunning result to get off to the best possible start. After a goalless first half, the Italians took the lead on the hour mark when Pol Lirola skipped past one challenge and bent the ball home. They doubled their advantage 15 minutes later when Gregoire Defrel raced clear to finish calmly. Sassuolo rounded off a stunning performance with Matteo Politano's clinical finish in the 82nd minute. Italian striker Mario Balotelli was making his European debut for Nice but his new side lost 1-0 at home to Schalke 04 with Baba Rahman scoring a 75th-minute winner. Premier League side Southampton won 3-0 against visiting Sparta Prague with a Charlie Austin double, while last season's beaten semi-finalists Villarreal won 2-1 at home to Zurich with ex-AC Milan and Chelsea striker Pato among the scorers. –Reuters