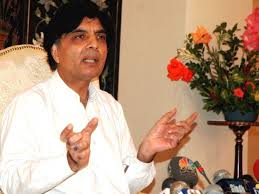 ISLAMABAD (92 News) – Interior Minister Chaudhry Nisar Ali Khan has on Friday commended security forces on foiling terrorist attack at PAF camp in Peshawar. Chaudhry Nisar said that the success in war against terrorism is manifestation of professionalism and preparedness of our security forces to deal with terrorists challenge. He said that the war against terrorism will continue till its logical end. The minister further prayed for the injured soldiers and officers.