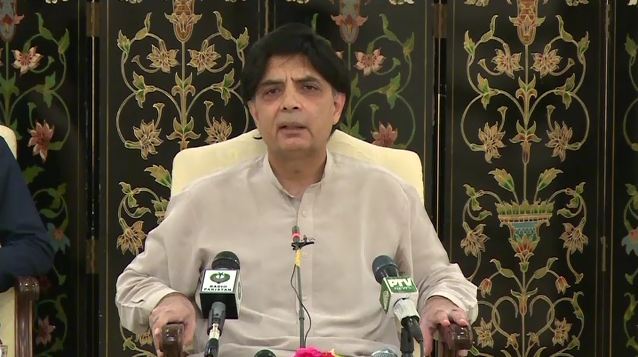 ISLAMABAD (92 News) – Interior Minister Chaudhry Nisar Ali Khan has on Sunday condemned MQM Chief Altaf Hussain for using objectionable language against the state institutions. Addressing a press conference in Islamabad on Sunday, he said Altaf Hussain’s fresh speech delivered from outside country was not that of any patriotic Pakistani. The Interior minister said that the actual danger to him is from the two cases in United Kingdom where the noose has been tightened against him by the UK agencies. The Interior Minister said Pakistan will extend all possible legal cooperation to UK in both these cases involving money laundering and murder of Imran Farooq. He said that the cases in Pakistan were not made by the Rangers and Army. Nisar said that the MQM invited the NATO forces to conduct operation in Pakistan. He said that the Rangers is conducting operation in Karachi from front, adding that the operation will continue. “The cases of kidnapping for ransom have been decreased 100 percent,” he said. Nisar said that Karachi police cooperated with Rangers in the operation. He said that this is the success of all military departments, adding that he didn’t ask anyone to him credit. The interior minister said that no one is against Muttahida Qaumi Movement, adding that the MQM is a pillar of Pakistan and we respect the Muhajirs. He said that we must respect of state and military institutions of the country, adding that we should not take internal political strife to Britain. “I am thankful to Pakistan Tehreek-e-Insaf leader Shah Mehmood Qureshi for kept positive attitude.” “No one knows better than me about the PTI sit-ins and I can write a book on the sit-ins.”