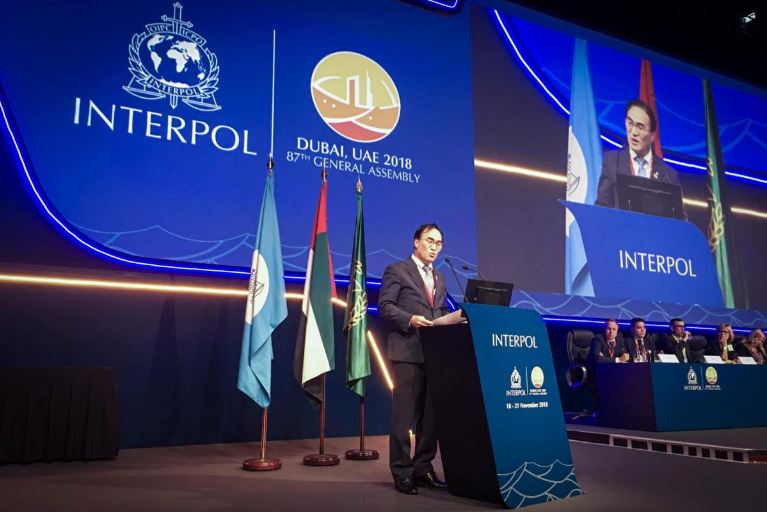 DUBAI (Reuters) - International police organization Interpol on Wednesday elected Kim Jong-yang of South Korea as president, beating a Russian whose candidacy had raised concerns in Europe and the United States about the risk of Kremlin interference. Interpol’s Secretary-General Jurgen Stock told reporters Kim’s election was free and transparent after Russia said clear outside pressure had been exerted on the vote. Kim was elected president, a largely ceremonial role, at Interpol’s annual congress in Dubai for a two-year term to succeed China’s Meng Hongwei. The presidency is typically held for four years. “The general assembly elected Mr. Kim from Korea as president through a voting process which was democratic, transparent, free and clear,” said Stock of Germany who heads day-to-day work at Interpol. The president is elected after winning a two-thirds majority among members in a secret ballot, according to Interpol’s website. U.S. and European politicians and Kremlin critics had lobbied against the candidacy of Alexander Prokopchuk of Russia, a police major-general and one of Interpol’s four vice-presidents. “No matter ... what the nationality of the presidency is, it is not affecting Interpol’s neutrality and the independence of our organization,” said Stock. Interpol’s role is to facilitate cooperation between police forces around the world. Its charter forbids it from involving itself in disputes of a political, religious or racial nature. It is not a supranational police force and has no agents who are allowed to make arrests. A bipartisan group of US senators this week accused Russia of exploiting the global body to settle scores and harass dissidents by issuing warrants, known as red notices, for their arrest. “Let me be crystal clear, the members of the executive committee, including the president, have absolutely no involvement or influence in the task force review or decision making process,” said Stock.

Kremlin spokesman Dmitry Peskov told reporters: “We regret that it wasn’t our candidate, but nonetheless there are no grounds to disagree with the election result.” Prokopchuk declined to comment. Kim, 57, worked in the South Korean police for more than 20 years before retiring in 2015. Kim, who had been acting president, is now completing the term of former president Meng, which was due to end in 2020. Kim will not be able to seek a second term under Interpol rules which limit the presidency to a single term, said Stock. Meng disappeared in September during a visit to China from where he sent a letter to Interpol announcing his resignation. Days after his wife reported him missing, Chinese authorities said he was under investigation. “Our world is now facing unprecedented changes which present huge challenges to public security and safety,” Kim said in a statement. “To overcome them, we need a clear vision: we need to build a bridge to the future.” South Korea’s President Moon Jae-in congratulated Kim on becoming the first South Korean to head the organization. Pacific island nations Vanuatu and Kiribati were approved this week as new Interpol member countries, while Kosovo’s bid was denied, bringing the total number of member states to 194. A number of countries including Serbia do not recognize Kosovo’s independence from Belgrade, declared in 2008.