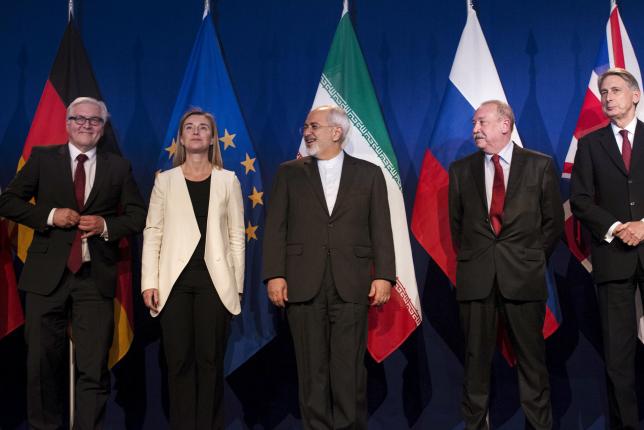 UNITED NATIONS - Beefing up international monitoring of Iran's nuclear work could become the biggest stumbling block to a final accord between Tehran and major powers, despite a preliminary deal reached last week. As part of that deal, Iran and the powers agreed that United Nations inspectors would have "enhanced" access to remaining nuclear activity in Iran, where they already monitor key sites. But details on exactly what kind of access the inspectors will have were left for the final stage of talks, posing a major challenge for negotiators on a complex and logistically challenging issue that is highly delicate for Iran's leaders. Securing proper inspections is crucial for the United States and other Western powers to ensure a final deal, due by June 30, is effective and to persuade a skeptical US Congress and Israel to accept the agreement. Iran says its nuclear program is peaceful, but it has never welcomed intrusive inspections and has in the past kept some nuclear sites secret. Sharply differing interpretations have emerged on what was covered by last week's framework agreement - a sign of what diplomats and nuclear experts say will be tough talks ahead. Iranian Supreme Leader Ayatollah Ali Khamenei, who has the final say for Iran on the deal, on Thursday ruled out any "extraordinary supervision measures" over nuclear activities and said military sites could not be inspected. That appeared to contradict a US "fact sheet" issued after last week's marathon talks in Switzerland which said the UN International Atomic Energy Agency (IAEA) would have "regular access to all Iran's nuclear activities" and to the supply chain that supports it, as well as a joint Iranian-European Union statement that said the IAEA would have expanded access in Iran. Aside from the question of Iranian consent, the logistical requirements for increased monitoring of Iranian sites would be daunting. It would involve more cameras, on-site inspections, satellite surveillance and other methods and might require the IAEA to assign more people and resources to its Iran team. David Albright, president of the Institute for Science and International Security, said it was crucial to come up with a mechanism for "anytime, anywhere" inspections that go beyond the IAEA's own special arrangements for short-notice inspections, known as the Additional Protocol. The Additional Protocol was created in the 1990s, after the discovery of Iraq's secret nuclear weapons program and revelations that North Korea and Romania had separated plutonium, as a means of smoking out covert arms-related activities. "It’s extremely difficult for Iran," said Albright, himself a former UN weapons inspector. "They don’t want it. They want to keep smuggling (nuclear materials). They’re buying a lot of things, and they’re not going to want to stop." "BIG FIGHTS" AHEAD Last week's framework accord between Iran, the United States, Britain, France, Germany, Russia and China cleared the way for talks on a final settlement by a June 30 deadline. The aim is to block an Iranian path to a nuclear bomb in return for lifting sanctions on Tehran. The framework would require Iran to mothball most of its installed enrichment centrifuges and curtail uranium enrichment and other sensitive work for at least a decade. The plan calls for IAEA-monitored storage by Iran of thousands of centrifuges and other infrastructure. Among the splits that have already emerged in the Iranian and Western interpretations of the deal are timing of sanctions relief and the removal of UN sanctions, as well as monitoring. "I believe monitoring and inspections may prove to be the most difficult nut to crack and I wouldn't be surprised if Iran and the P5+1 (six powers) have some big fights about it," a senior diplomatic source told Reuters condition of anonymity. The interim deal makes clear that broader inspections will be mandatory for Iran. The joint EU-Iranian statement said that the IAEA "will have enhanced access through agreed procedures, including to clarify past and present issues." Iran signed the Additional Protocol in 2003, a year after the existence of its Natanz enrichment site and Arak heavy-water production facility was revealed. Tehran began voluntarily implementing the protocol but never ratified it. It eventually stopped implementing it. US State Department spokeswoman Marie Harf told reporters in Washington on Wednesday that Iran had agreed that it would resume implementation of the Additional Protocol and would submit it for ratification. But Olli Heinonen, the IAEA's former chief nuclear inspector who is now at Harvard University, said Additional Protocol inspections would likely not be enough for proper monitoring. The Additional Protocol has limitations, experts say, such as not covering research by Iran that the IAEA is investigating and which Western countries believe was linked to weaponization. Heinonen said there would have to be a new comprehensive Iranian declaration about its nuclear program that also includes information about Iranian cooperation with foreign states. "You need some provision about nuclear cooperation with other countries given the stories about cooperation with North Korea," Heinonen said. Jacqueline Shire, a non-proliferation expert and former member of the UN Security Council's Panel of Experts on Iran, said resolving questions about the so-called "possible military dimensions" of Iran's past nuclear activities was crucial but extremely difficult. "Iran will have to engage with the IAEA on this in a way it has not, up to this point, been willing to," she said. Heinonen, Albright and Shire said that failure to address the possible military dimensions could undermine confidence in any monitoring and inspection regime. "If you leave PMD unresolved, then there could be many unknowns," Heinonen said. - Reuters