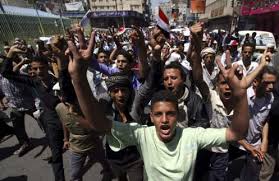 ANKARA - Iran demanded an immediate halt to Saudi-led military operations in Yemen on Thursday and said it would make all necessary efforts to control the crisis there, Iranian news agencies reported. Warplanes from Saudi Arabia and Arab allies on Thursday struck Iran-allied Houthi forces fighting to oust the country's Western-backed president. Saudi-owned al-Arabiya TV reported a ground offensive with troops from other Muslim states was being prepared. "The Saudi-led air strikes should stop immediately and it is against Yemen's sovereignty," the Students News Agency quoted Iranian Foreign Minister Mohammad Javad Zarif as saying. "We will make all efforts to control the crisis in Yemen," Zarif said, according to the agency's report from the Swiss city of Lausanne where he is negotiating with six world powers to resolve a years-old dispute over Tehran's nuclear ambitions. Earlier on Thursday, the Foreign Ministry in Tehran called for an end to the military operation. "Iran wants an immediate halt to all military aggressions and air strikes against Yemen and its people," Fars quoted Foreign Ministry spokeswoman Marzieh Afkham as saying. "Military actions in Yemen, which faces a domestic crisis, ... will further complicate the situation ... and will hinder efforts to resolve the crisis through peaceful ways." Violence has spread across Yemen since last year, with Houthi militia seizing Sanaa and sidelining US ally President Abd-Rabbu Mansour Hadi. It has made Yemen a front in Saudi Arabia's region-wide rivalry with Shi'ite-dominated Iran. Tehran denies providing money and training to the Shi'ite Houthi militia in Yemen, as alleged by some Western and Yemeni officials. Yemeni Foreign Minister Riyadh Yaseen called on Monday for Gulf Arab help to prevent the Houthis from gaining control of its Yemeni airspace. Afkham warned that the Saudi-led "aggression is a dangerous move which is in violation of international responsibilities for respecting the sovereignty of countries. It will lead to the spread of terrorism and extremism in the Middle East region." Negotiations between Iran and six powers in Lausanne are aimed at striking a detailed political understanding by the end of March and reach a full agreement by June 30. Saudi Arabia fears that the atomic deal would leave the door open to Tehran gaining a nuclear weapon, or would ease political pressure on it, giving it more space to back Arab proxies opposed by Riyadh. "I am concerned by the impact of regional and international events on the nuclear talks," Iran's nuclear chief Ali Akbar Salehi told reporters in Lausanne, saying there were people "who are trying to ensure there is no deal." - Reuters