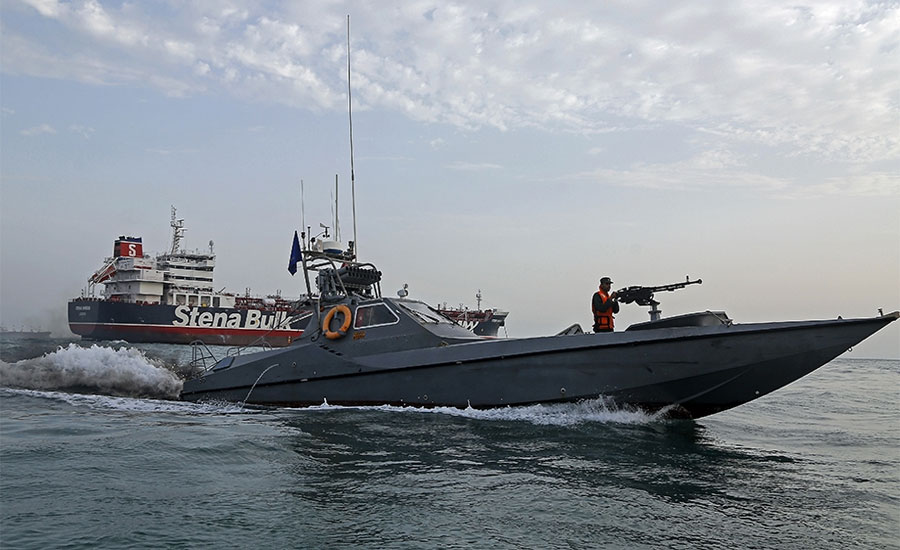 TEHRAN (Web Desk) - Senior Iranian officials have warned against any attempt to form an international coalition to protect shipping in the Gulf, with its first vice president saying the move will only bring insecurity to the region.

The alert response comes after Italy, Denmark, the Netherlands and France backed UK's proposal for a European naval force after Tehran seized a British-flagged tanker in the Strait of Hormuz in what appears to be a tit-for-tat move.

Relations between the two countries have been on the boil since British authorities detained an Iranian tanker earlier this month off the coast of Gibraltar on suspicion it was shipping oil to Syria in breach of EU sanctions.

Iran has accused the UK of acting at the behest of the US and demanded the immediate release of the ship. On Tuesday, Zarif congratulated Boris Johnson, who is set to take over as the next prime minister from Theressa May amid the diplomatic standoff between the two countries. "Iran does not seek confrontation. But we have 1500 miles of Persian Gulf coastline. These are our waters & we will protect them," he tweeted. Al Jazeera's Dorsa Jabbari, reporting from the Iranian capital, Tehran, said that Zarif’s sentiments are also shared by other high ranking officials. "We have heard from Iran's first Vice President [Es'haq Jahangiri] who also said that the suggestion that international coalition forces will patrol the waters of Strait of Hormuz and guard the ships that pass through it is absolutely not necessary. "And Iran is capable of providing security to the ships and it is up to Iran and the regional countries to ensure the safety of their waters." Abbas Araqchi, Zarif's deputy, on Tuesday assured that Tehran will secure the Strait of Hormuz and not allow any disturbance in shipping in the key oil transport waterway. The Iranian capture of the ship in the global oil trade's most important waterway was the latest escalation in three months of spiralling confrontation with the West that began when new, tighter US sanctions took effect at the start of May. Iran maintains the seizure of the Stena Impero tanker was due to failure "to respect international maritime rules". UK's Foreign Minister Jeremy Hunt has called it "an act of state piracy", but his Iranian counterpart Mohammad Javad Zarif denied the ship's seizure was a retaliatory act. Last month Trump nixed a US plan to strike Iran at the last minute following downing of a US surveillance drone. Iran and the US have been at the loggerheads since May 2018 when Trump withdrew from the 2015 nuclear deal that put a cap on Tehran's nuclear ambitions in exchange for sanctions relief. But the European partners to the deal have struggled to help Iran in circumventing the punishing US sanctions that have choked exports of Iranian oils. The other signatories to the nuclear deal - China, Russia, the United Kingdom, France, Germany and the EU representatives - will meet on Sunday in Austria's capital, to discuss to what extent the agreement can be salvaged. They will "examine issues linked to the implementation of the [2015 nuclear accord] in all its aspects", the EU statement said on Tuesday. "This is the last ditch effort to try and salvage what’s left of the 2015 nuclear deal because Iran insists it will continue to scale back its commitment every 60 days until it sees some tangible results on what the Europeans have been promising under the deal," Al Jazeera’s Jabbari said.