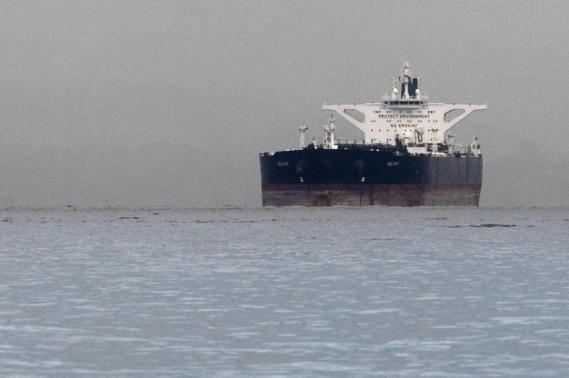 WASHINGTON - A possible deal over Iran's nuclear program that would phase out economic sanctions against Tehran is unlikely to flood world markets with more oil any time soon, despite Iran's declared intention to claw back market share lost because of the curbs. Negotiators are still working out details of the deal they aim to seal by the end of June, but it would almost certainly lift sanctions only in stages, deferring even a partial return of Iranian crude exports until at least 2016, according to market experts, former US officials, and Western diplomats. Progress in talks in Switzerland this month has contributed to a more than 10 percent slide in oil prices over the past week as some traders and analysts brace for up to 1 million barrels per day (bpd) of Iranian crude hitting markets, potentially doubling the estimated global supply surplus. Many focus on how quickly Iran can technically resume pumping oil to pre-sanctions levels, assuming shipments could follow quickly and brushing off concerns about a diminished customer base and potentially neglected oil fields. What oil bears may underestimate is the hurdles on the diplomatic path to Iran's return to world energy markets. "Don't expect to open the tap on oil," one Gulf-based Western diplomat told Reuters. It is much easier to lift financial sanctions because so many components of Iran's oil trade have been targeted, the diplomat said. To be sure, a nuclear deal could allow some Iranian oil to return to the market quickly. A Reuters analysis of industry data shows Iran has up to 12 million barrels of oil in floating storage off its shores, and it has leased a storage facility in China to ship crude to India andSouth Korea. Some energy experts estimate that Iran could raise its exports by 500,000-800,000 barrels per day (bpd) within six months of sanctions being lifted, but that is likely to be a result of a gradual build-up. “The initial market response (to a deal) is likely to be quite bearish," said Richard Mallinson, an analyst at consultancy Energy Aspects in London. "The attention is still on oversupply and there are enough people out there saying this could drive a rapid increase in Iranian volumes.” Yet whatever emerges this year "may not be the kind of flood of oil...that some in the market are worried about," Mallinson said. FIGHTING BACK Tehran is keen to recover market share lost under the US-led sanctions that curbed the nation's oil exports to just 1 million bpd from 2.5 million bpd in 2012. "Under no circumstance will we reduce our global market share, even by one barrel," Iranian oil minister Bijan Zanganeh said in November. But for Iran to sell significantly more crude and repatriate hard currency earnings, many US and European restrictions on its shipping, insurance, ports, banking, and oil trade would have to be lifted or waived. Yet because they represent the bulk of world powers' leverage over Iran, initial relief would probably be modest, said Zachary Goldman, a former policy advisor at the US Treasury Department's Office of Terrorism and Financial Intelligence, where he helped develop Iransanctions policy. Goldman predicted the first step would be to allow Tehran to use more of its foreign currency reserves abroad, now limited to specific bilateral trade. "It's discrete, and it doesn't involve dismantling the architecture of sanctions that has been built up painstakingly over the last five years," said Goldman, who now heads the Center on Law and Security at New York University. Even with a nuclear deal, oil sanctions would probably effectively stay in place until early 2016, said Bob McNally, a former White House adviser under George W. Bush and now president of the Rapidan Group energy consultancy. "I don't see why a political deal in March or April or even technical implementation in July would, from a sanctions compliance perspective, enable Iran to 'unload' its stored oil any time soon, if doing so significantly increased exports above current levels," McNally said in an email to Reuters. Low oil prices may also limit how much Iran will want to ship abroad. Zanganeh has said that the country's oil industry could survive prices as low as $25 per barrel. The latest price slump, however, may cause Tehran to think twice about flooding the market even if sanctions are lifted, said David Goldwyn, who served as the US State Department's Special Envoy and Coordinator for International Energy Affairs from 2009 to 2011 and who now chairs the Atlantic Council's Energy Advisory Board. "It may depend on how desperate they are for cash," he said. Iran will also face stiff competition for its main Asian markets with fellow members of the Organization of Petroleum Exporting Countries (OPEC) such as Saudi Arabia, Kuwait andIraq. Kuwait and other Arab OPEC members have raised doubts whether Iran will manage to ramp up production quickly given that some of its oil fields have stayed idle because of the sanctions. - Reuters