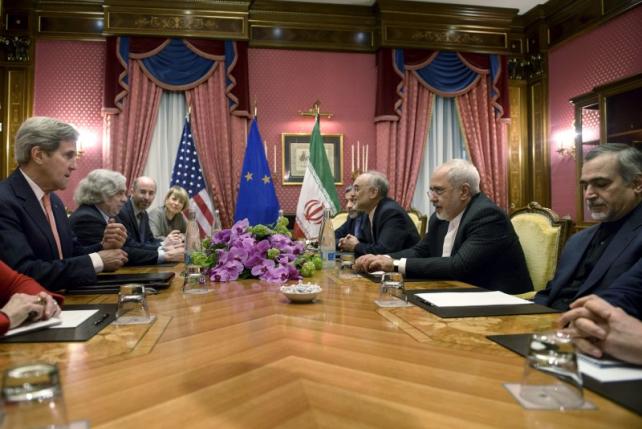 LAUSANNE, SWITZERLAND/ANKARA - Iran and major powers are close to agreement on a 2- or 3-page accord with specific numbers that would form the basis of a long-term settlement aimed at ending a 12-year standoff over Tehran's nuclear ambitions, officials said on Friday. Western and Iranian officials familiar with the negotiations between Iran, the United States, Britain, France, Germany, Russia and China cautioned that they still had not agreed on the framework of a deal and key details were still being hotly negotiated. "The sides are very, very close to the final step and it could be signed or agreed and announced verbally," a senior Iranian official familiar with the talks told Reuters on condition of anonymity. Other officials echoed the remarks while warning that negotiations in the coming days might still fail. US Secretary of State John Kerry and Iranian Foreign Minister Mohammad Javad Zarif have been discussing the political framework agreement for days in Lausanne, Switzerland. Other foreign ministers from the six-power group are expected to arrive over the weekend. There were discussions under way about whether to make the 2- or 3-page document public, but two officials said it would be released. It was expected that some details of the agreement would be kept confidential, officials noted. "The plan is for the 2-3 page (document) to be made public," one official said. Earlier a senior US official said it was now time for Iran to make the necessary hard decisions to make a deal possible. If agreed, the document would cover key numbers for a future nuclear agreement betweenIran and the six - such as the maximum number and types of uranium enrichment centrifuges Iran could operate, the size of uranium stockpiles it could maintain, types of atomic research and development it could undertake and details on lifting sanctions that have crippled Iran's economy. One of the key numbers in the agreement is expected to be the duration of the agreement, which the officials said would have to be in place for more than 10 years. And once the main agreement would expire, there would likely be a period of special UN monitoring for Tehran's nuclear program. The goal of the negotiations, under way for nearly 18 months, is to hammer out an accord under which Iran would halt sensitive nuclear work for at least a decade in exchange for lifting sanctions, with the ultimate aim of ending Iran's 12-year nuclear standoff with the West and reducing the risk of a war in the Middle East. The two sides have been working to agree on a preliminary framework accord by the end of March, to be followed by a comprehensive deal by June 30 that includes all technical details on limits Tehran would place on sensitive nuclear activities in exchange for the easing of sanctions. It remains unclear whether the agreement between the two sides will be formally signed or agreed to verbally. The Iranians have been opposed to the idea of a written agreement, fearing that committing to something in writing would limit Tehran's negotiating space while the technical details would be worked out in the coming months. Even if such a preliminary deal is accepted in the coming days, the officials said, there was no guarantee the two sides would be able to agree on the many technical details by June 30. The negotiations could still fall apart afterward, they cautioned. There are some details that have been out in the open for months. An Iranian government website said in November that Washington could let Iran keep some 6,000 early-generation centrifuges, down from nearly 10,000 now in operation. Along with lifting UN sanctions, officials say the biggest sticking point in the talks remains centrifuge research and development. They say Iran wants to conduct advanced centrifuge research at the underground Fordow site, but the Western powers dislike the idea of Iranoperating centrifuges there. The deal would call for US, European Union and United Nations Sanctions to be lifted gradually according to a specific schedule. Some sanctions could be lifted very quickly, the officials said. Iran denies allegations by Western powers and their allies that it is seeking the capability to produce atomic weapons. - Reuters