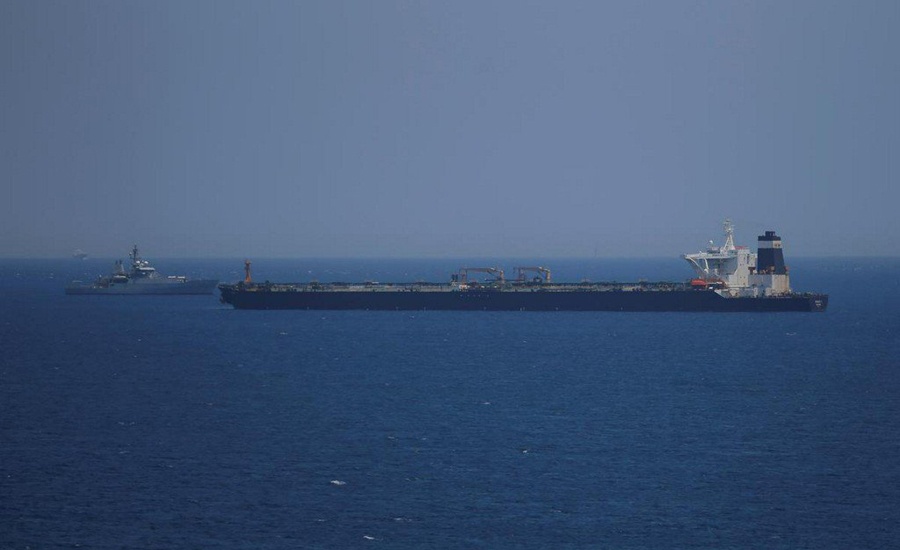 DUBAI (Reuters) - Iran said on Thursday it had seized a foreign tanker smuggling fuel in the Gulf, and the US military commander in the region said the United States would work “aggressively” to ensure free passage of vessels through the vital waterway. The United States blames Iran for a series of attacks on shipping in the world’s most important oil artery since mid-May, accusations Tehran rejects but which have raised fears the long-time foes could stumble into war. It was unclear if the impounded ship was the same vessel Iran towed to safety on Sunday after sending a distress signal. Iranian state television had earlier said it was the same ship but the Revolutionary Guards statement did not confirm that. The Guards said the impounded ship was smuggling one million litres of fuel in the area of Larak Island in the Gulf and had 12 foreign crew. Oil prices rose after news of the seizure amid rising tensions between Tehran and the West over the safety of shipping in the Strait of Hormuz, a vital gateway for energy exports. Brent crude LCOc1 futures were up 54 cents at $64.20 a barrel by 1230 GMT after hitting a session high of $64.46. Although Iran has yet to name the vessel, shipping industry sources said they believe it to be the MT Riah. Refinitiv data showed that the last signal received from the vessel was on Sunday when it was in the Strait of Hormuz off the Iranian island of Qeshm, heading towards Oman from Larak Island. The tanker’s registered manager is Prime Tankers in the UAE. That company told Reuters it had sold the tanker to another UAE-based company, Mouj al-Bahar. An employee at Mouj al-Bahar said that the firm did not own it but had been managing the vessel up to two months ago, and that it was now under the management of a company called KRB Petrochem. Reuters could not reach KRB Petrochem for comment.

Iran, which has some of the world’s cheapest fuel prices due to heavy state subsidies and the fall of its currency, has been fighting rampant fuel smuggling by land to neighbouring countries and by sea to Gulf Arab states. The Revolutionary Guards said in Thursday’s statement they had seized no other ship in the Gulf, as Western countries expressed concerns over alleged Iranian actions in the region. Since mid-May, attacks on tankers near the Strait of Hormuz have unsettled crucial shipping lanes that link Middle Eastern oil producers to markets in Asia, Europe, North America and beyond. Iran denies involvement but has threatened to respond robustly to US sanctions that have followed President Donald Trump’s abandonment of a 2015 treaty in which Iran agreed to restrict nuclear work in return for the lifting of sanctions. The Islamic Republic says it will continue to reduce compliance with the accord until it is allowed to resume normal oil sales, and has demanded European parties to the nuclear deal rein in the United States. Washington, however, says it wants to increase pressure on Iran to renegotiate the accord, discuss its missile programme and modify its behaviour in the Gulf, where the United States is allied to several Arab states opposed to Iran. US Central Command chief General Kenneth McKenzie said the United States was talking to several countries about ensuring freedom of navigation in the Gulf. He was speaking in Riyadh at a news conference with General Prince Fahd bin Turki, commander of the Saudi-led coalition fighting the Iran-aligned Houthis in Yemen. The United States has beefed up its military presence and is asking allies to help protect the strategic waters off Iran and Yemen. The US Fifth Fleet, based in Bahrain, says Gulf Arab states have stepped up patrols. Britain meanwhile urged Iran to ease tensions in the Gulf on Thursday and said it was seeking information about the latest incident. “But it is vital that we send a very clear message to Iran that we want them to step back from this situation, that we want them to de-escalate, but we have always and we will continue to protect shipping and the free flow of goods in that area,” Defence Secretary Penny Mordaunt told a defence conference. Iran accused Britain of piracy earlier this month after British Royal Marines seized an Iranian tanker off the coast of Gibraltar on sUSpicion it was shipping oil to Iran’s ally Syria in breach of EU sanctions on that country.