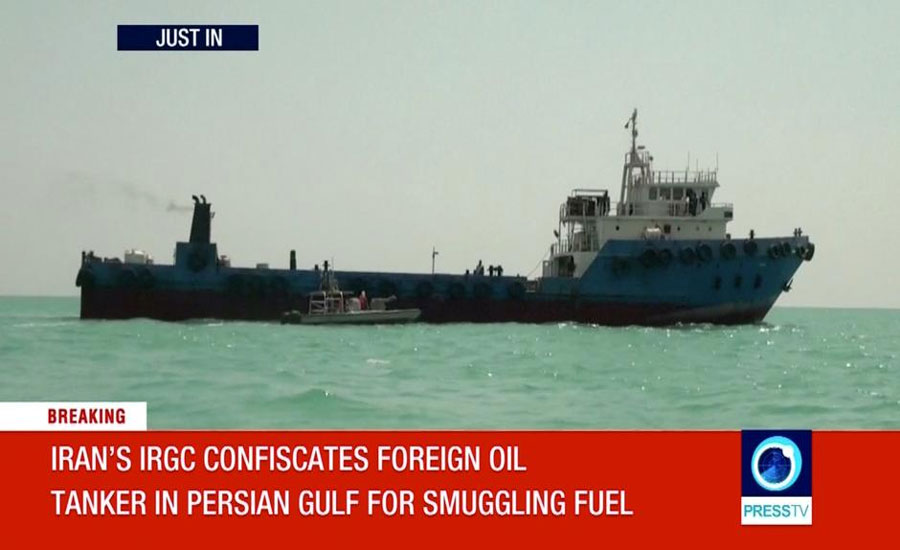 DUBAI (Reuters) - Iranian Revolutionary Guards seized an Iraqi oil tanker in the Gulf which they said was smuggling fuel and detained seven crewmen, Iran’s state media reported on Sunday, in a show of power amid heightened tension with the West. The vessel was intercepted near Iran’s Farsi Island in the Gulf, Iran’s semi-official Fars news agency said. The elite Revolutionary Guards Corps (IRGC) has a navy base on Farsi Island which is located north of the Strait of Hormuz. “The IRGC’s naval forces have seized a foreign oil tanker in the Persian Gulf that was smuggling fuel for some Arab countries,” the Guards commander Ramezan Zirahi told state TV. The state news agency IRNA, quoting the Guards, said it was an Iraqi ship that was seized on Wednesday night in the Gulf. Zirahi said it was carrying 700,000 litres of fuel, without elaborating on the nationalities of the detained crewmen. “The boats of the IRGC navy were patrolling the area to control traffic and detect illicit trade when they seized the tanker,” Fars quoted Zirahi as saying, adding that the seizure was in coordination with Iran’s judicial authorities. Iran, which has some of the world’s cheapest fuel prices due to heavy state subsidies and the fall of its currency, has been fighting rampant fuel smuggling by land to neighbouring countries and by sea to Gulf Arab states. “The tanker was transferred to the Bushehr port, where its fuel was handed over to the authorities,” Zirahi told TV. A spokesman for the U.S. Navy’s Bahrain-based Fifth Fleet said they had no information to confirm the media reports. Iran’s English-language Press TV aired a video that it said “shows the process through which the IRGC have halted the ship and taken it into custody”. “The ship was seized in Iranian territorial waters and had been transporting diesel fuel,” it added. Another oil tanker, the Panama-flagged MT Riah, was captured by the elite force last month for allegedly smuggling fuel. Tensions have risen between Iran and the West since last year when the United States pulled out of an international agreement which curbed the Islamic Republic’s nuclear programme in return for an easing of economic sanctions on Iran. Fuelling fears of a Middle East war with global repercussions, the Guards seized British tanker Stena Impero near the Strait of Hormuz in July for alleged marine violations, two weeks after British forces captured an Iranian oil tanker near Gibraltar accused of violating sanctions on Syria.

Angered by intensified U.S. sanctions designed to strangle its vital oil trade and the failure of Britain and European parties to the agreement to salvage the pact, Tehran has decreased its commitments to the nuclear deal. Iran also has threatened to block all exports through the Strait, if countries heed U.S. calls to stop buying Iranian oil. One-fifth of global oil consumption passes through the Strait from Middle East crude producers to major markets. “The Persian Gulf is like a tinderbox and explosion of a firecracker can lead to a huge disaster,” the semi-official Mehr news agency quoted Guards commander Brigadier General Ahmadreza Pourdastan as saying on Sunday. “All countries which have interests in the region absolutely are not willing to see a new regional crisis.” After several attacks in May and June on oil tankers - blamed by Washington on Tehran, which denied responsibility - Trump has been trying to forge a military coalition to secure Gulf waters, though European allies have been loath to join for fear of provoking open conflict. European parties to the deal - Britain, France and Germany - have instead appealed for diplomatic moves to defuse the crisis and have been trying to salvage the pact by exploring ways to shield Iran’s economy from U.S. sanctions. Tehran has called on them to accelerate their efforts or it will further decrease its commitments to the agreement. Britain said on July 25 it had started sending a warship to accompany all British-flagged vessels through the Strait. Iran has repeatedly said it will not allow any disturbance in shipping in the key oil transport waterway, claiming responsibility for the security of the Strait. In an apparent bid to calm tensions in the Gulf, Shi’ite-dominated Iran has called for improving relations with its regional Sunni rivals Saudi Arabia and the United Arab Emirates. Last month, Iran and the UAE revived maritime security talks in Tehran that had been off since 2013. Iranian media reported on Sunday that Iranian and Qatari coast guards will meet to “improve maritime and border cooperation”.