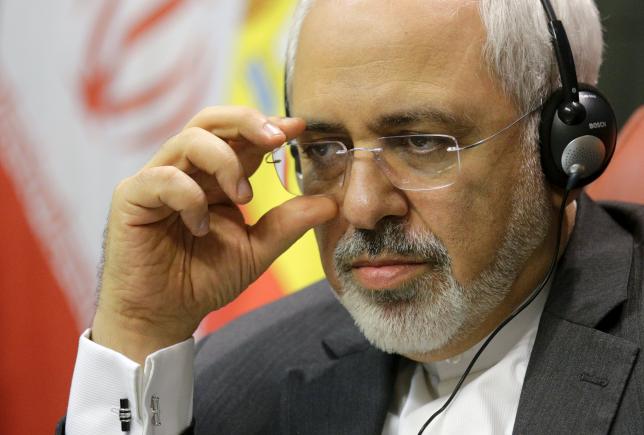 UNITED NATIONS - Iran's foreign minister on Friday submitted a letter to UN Secretary-General Ban Ki-moon outlining a four-point peace plan for Yemen, where Iranian-backed Houthi rebels have been targeted for three weeks by Saudi-led air strikes. The plan, which Foreign Minister Mohammad Javad Zarif announced earlier this month, calls for an immediate ceasefire and end of all foreign military attacks, humanitarian assistance, a resumption of broad national dialogue and "establishment of an inclusive national unity government." "It is imperative for the international community to get more effectively involved in ending the senseless aerial attacks and establishing a ceasefire, ensuring delivery of humanitarian and medical assistance to the people of Yemen and restoring peace and stability to this country through dialogue and national reconciliation without pre-conditions," said Zarif's letter, which was obtained by Reuters. Western and Arab diplomats in New York have shown little interest in the plan, saying they do not consider Iran a neutral peace broker in Yemen. UN officials confirmed receipt of the letter, and a request from Iran to share it with the 15-nation Security Council. It was not clear what they would do with the proposal. Arab states have been bombing the Houthis in support of militias resisting an advance by the group. The conflict, though rooted in local rivalries, has become a proxy battlefield for Sunni Saudi Arabia and Shi'ite Iran. Ki-moon on Thursday called for an immediate ceasefire by "all sides" in Yemen, the first time he has made such an appeal since Saudi-led air strikes against the Houthi rebels began. Iran warned that the instability was allowing terrorist groups to gain a foothold in Yemen. "This critical situation is escalating and the humanitarian crisis in Yemen is approaching catastrophic dimensions," Zarif's letter said. "It may result in further exacerbation of the already tense circumstances in a region that has been plagued by one of the most barbaric types of extremism and (a) multi-pronged vicious campaign of foreign-backed terrorists," it said. Yemen is home to one of the most lethal branches of al Qaeda, sheltering in tribal regions and targeted for years by U.S. drone strikes. The UN said about 150,000 people had been driven from their homes by three weeks of air strikes and ground fighting, with more than 750 people killed. - Reuters 1