Iran, US meet for four hours before nuclear talks move to Brussels 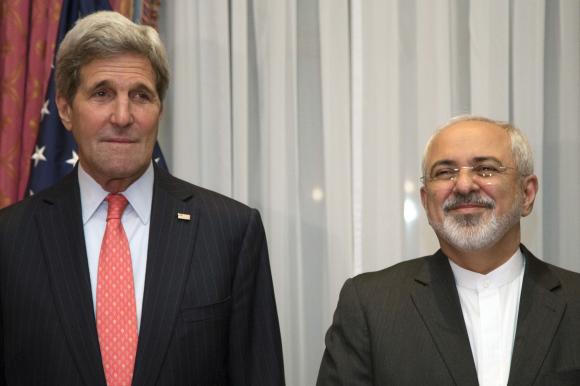 Iran, US meet for four hours before nuclear talks move to Brussels

LAUSANNE, Switzerland – US Secretary of State John Kerry and Iranian counterpart Mohammad Javad Zarif held four hours of nuclear talks on Monday in the Swiss city of Lausanne before the Iranian delegation headed to Brussels for meetings with European ministers. "We're obviously in crunch time right now, and the next couple of days leading up to this weekend will be key," State Department spokeswoman Jen Psaki told CNN from Washington. "We fully expect we will take to the end of the month to determine if we can get to an agreement that both sides can live by." Six world powers - the United States, Germany, France, Britain,Russia and China - are trying to reach a framework agreement with Iran by the end of the month that would curb Tehran’s most sensitive nuclear activities for at least 10 years in exchange for the gradual easing of some sanctions. The parties have set a June 30 deadline to finalize an accord. The meeting between Kerry and Zarif included US Secretary of Energy Ernest Moniz and Iran's nuclear chief Ali Akbar Salehi, who also met on Sunday to negotiate technical details of Iran's nuclear program. "I'm very optimistic," Salehi told reporters afterwards, leaving Zarif and Kerry in the room for a one-on-one meeting. Kerry has urged Iran to make concessions that would allow six world powers to reach a political framework agreement for a nuclear deal with Tehran that would lift sanctions in exchange for tight restrictions on Tehran's nuclear program. The West suspects Tehran of ambitions to create an atomic weapon. Tehran denies that accusation and says its research is for purely peaceful purposes. In Brussels, British Foreign Secretary Philip Hammond said an interim deal was still some way off. "There are areas where we've made progress, areas where we have yet to make any progress," he told reporters as he arrived for a meeting with his EU peers. After their meeting in Brussels, the Iranian delegation will return to Lausanne for more talks with the Americans, and will be joined later in the week by European ministers. –Reuters