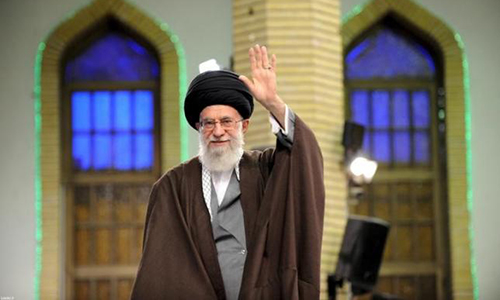 ANKARA – Iranian Supreme Leader Ayatollah Ali Khamenei said on Friday Tehran had no intention of cooperating on regional issues with its main enemies, the United States and "evil" Britain. Khamenei also accused Washington of not being committed to a nuclear deal reached between Tehran and six major powers, including the United States, in 2015 that aims to curb the country's disputed nuclear program. Under the agreement, economic sanctions were lifted in January after Iran suspended sensitive nuclear work that the West suspects was aimed at creating a nuclear bomb. Iran denies seeking a nuclear bomb. Inflation, unemployment and other economic hardships persuaded Khamenei to support President Hassan Rouhani on the nuclear question aimed at improving the parlous state of Iran's economy. "America has continued its enmity towards Iran since (the 1979 Islamic) revolution ... It is a huge mistake to trust evil Britain and the Great Satan (the United States)," Khamenei said in a speech broadcast live on state TV. "We will not cooperate with America over the regional crisis," he said, adding that: "Their aims in the region are 180 degrees opposed to Iran's." Asked about Khamenei's remarks, US State Department spokesman Mark Toner said he did not really have a response. "His rhetoric is always somewhat hyperbolic and so we take it with a grain of salt and don't necessarily rise to the bait," Toner told reporters. Relations with Washington were severed after Iran’s 1979 Islamic revolution and enmity to the United States has always been a rallying point for hardliner supporters of Khamenei in Iran. Tehran and Washington have common interests and threats across the Middle East. They have cooperated tactically in the past, including when Tehran helped Washington counter al Qaeda in Afghanistan and Islamic State militants (IS) in Iraq. The United States and its allies in the Middle East accuse Iran of supporting terrorism and interfering in the affairs of regional states, including Syria, Yemen and Iraq. Tehran is Syrian President Bashar al-Assad's main regional ally and has provided military and economic support to his fight against rebel groups and IS. Following the end of the sanctions on Iran, the country has started to increase trade with the West. But some US sanctions remain and US banks remain prohibited from doing business with Iran directly or indirectly because Washington still accuses Tehran of supporting terrorism and human rights abuses. "They use human rights, terrorism ... as pretexts to avoid fulfilling their commitments," Khamenei said. "If we remain strong and united and revolutionary, those who are trying to bully Iran and are against us will not succeed," he told a gathering to commemorate the anniversary of the death of the revolution's founder, Ayatollah Rouhollah Khomeini, in 1989. Iran has repeatedly urged Washington to do more to remove obstacles to the banking sector. Khamenei, whose hostility toward Washington holds together Iran’s faction-ridden leadership, said Iran should "remain cautious in its economic interaction with the West". –REUTERS