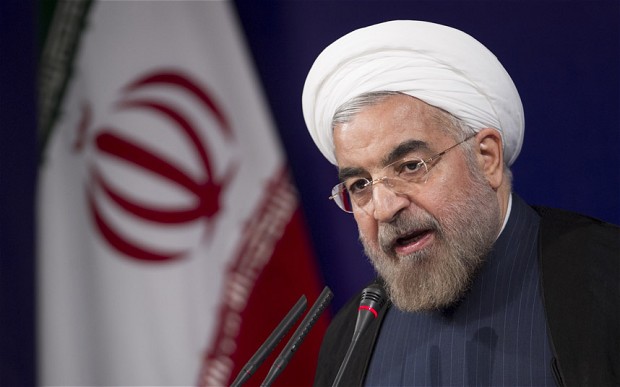 LAUSANNE, SWITZERLAND - Iran's president spoke with the leaders of France, Britain, China and Russia on Thursday in an apparent effort to break an impasse to a nuclear deal between Tehran and major world powers. He also raised the Saudi-led military operation against Iranian-backed Houthi fighters in Yemen, as did US Secretary of State John Kerry ahead of nuclear negotiations in Switzerland with Tehran's Foreign Minister Mohammad Javad Zarif. The United States is pushing for a nuclear deal between Iran and major powers before a March 31 deadline, and officials close to the talks said some kind of preliminary agreement was possible. However, a senior British diplomat acknowledged: "There are still important issues where no agreement has so far been possible. "Our task, therefore, for the next few days is to see if we can bridge the gaps and arrive at a political framework which could then be turned into an agreement," the diplomat told reporters on the sidelines of negotiations in Lausanne, Switzerland. The six powers, which include Germany and the United States, hope to reach a comprehensive nuclear agreement by June 30. Western powers fear Iran wants to build nuclear bombs, though Tehran says its atomic research is for peaceful purposes. The powers hope to persuade Iran to scale back its nuclear activity in return for the removal of economic sanctions. Israel is believed to have the Middle East's only nuclear arsenal and has in the past threatened Iran with military attack. The spokeswoman for US President Barack Obama's National Security Council, Bernadette Meehan, confirmed that "a letter from President Rouhani to President Obama was passed to the US negotiating team in Lausanne." She offered no details. In a rare direct exchange between Paris and Tehran, French President Francois Hollande said Iran had a right to civilian nuclear power but insisted on a "lasting, robust and verifiable Iranian nuclear program that guarantees Iran will not get an atomic weapon", a statement from the French presidency said. Last week officials close to the negotiations said France was demanding more stringent conditions than its Western allies for any future agreement. Rouhani reiterated Tehran's principal demand - that the most crippling sanctions be lifted immediately. "All unjust sanctions against the Iranian nation should be lifted," he said on Twitter. "Lifting all sanctions is the main issue that can help us reach the final solution." Western powers insist that sanctions relief must come gradually, though European and US measures against Iranian energy and financial sectors and some U.N. sanctions could be suspended quickly, officials close to the talks said. British Prime Minister David Cameron's spokeswoman told reporters after the call that the two sides agreed it was possible to conclude a framework nuclear deal by end-March. Rouhani also spoke with Russian President Vladimir Putin, the Kremlin said. On his Twitter feed, Rouhani said he raised military operations in Yemen launched by Iran's regional rival Saudi Arabia with all four leaders. KERRY MEETS ZARIF Kerry and Zarif met twice on Thursday in Lausanne and Kerry raised the Yemen crisis, a State Department spokesman said, though a senior US official told Reuters the issue did not have any impact on the nuclear negotiations. Washington and Tehran take opposing stands on Saudi-led air strikes in Yemen against Shi'ite Houthi rebels allied to Iran who are fighting to oust Yemen's president. Earlier, Iranian media quoted Zarif as condemning the Saudi-led military operation and demanding that it stop. Kerry spoke to the foreign ministers of Saudi Arabia and other Gulf Cooperation Council members and welcomed their action against the Houthis, a senior US official said. Iran and the six powers are seeking a political framework accord by the end of this month that would lay the foundations for a full nuclear deal by June 30. Under a final settlement, Tehran would halt sensitive nuclear work for at least a decade and in exchange, international sanctions would be lifted. Speaking to reporters traveling with Kerry from Washington on Wednesday, a senior State Department official said the six powers would not rush to complete a framework agreement just because there was a March 31 deadline. But the official said: "We very much believe we can get this done by the 31st ... We see a path to do that." The official added, however, that there was no guarantee of success. Ali Akbar Salehi, head of Iran's Atomic Energy Organisation, also said a deal was possible but not certain. "It is difficult to forecast whether we can reach a result at this round of talks but we are moving toward reaching a mutual understanding in all technical issues," he told Iranian state television. Israel, Saudi Arabia, France and the US Congress have all raised concerns that the Obama administration might be willing to conclude a deal that would allow Iran to develop a nuclear weapons capability in the future. - Reuters